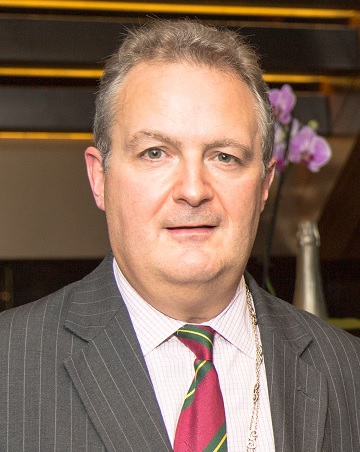 My third year has been a busy one. In my mandate, my objectives were to continue supporting gastronomy and finding interesting venues that appeal to our membership which I hope I have achieved.

2017 has been a very successful year and I am grateful to the Committee members who have attended the working group and helped source venues and will continue to do so. I would like to thank Vic Laws for organising table plans and place cards ahead of each event which allows all members to view the attendees for a dinner. This has been recognised by the members as a real success. It also provides a great opportunity for members of the committee to be divided across tables to meet members and guests.

As we continue to raise the awareness of the Reunion, the working group identified that our website should be upgraded with a more up to date platform to aid easier maintenance and for it to adhere to mobile and tablet conformity.

Links to Social Media such as YouTube, Twitter and LinkedIn are helping raise our profile further. I would like to thank Paul Wenham, who manages our website and social media platforms. He has also contributed greatly in getting photographs taken at all our events and making them available soon after each event.

Demir Ozyurt, our photographer has really captured the essence of our dinners.

I would also like to congratulate Alison Frith, for taking charge of the Reunions Social Media presence. Her team has put a programme together to film and interview members of the Reunion. You will find them very informative and a true insight to some of the Hospitality Personalities that we have among our membership. They can be seen on our website in the News Feed.

The following have so far been interviewed.

I would like to thank Alan Fairbrass our Almoner, Neville Watson and of course Cyril Freeman for all their support over the last 3 years.

I am very pleased to say that the Committee and I have made enormous progress and the following list gives you an idea how much the Committee has been able to achieve:

When we created the Reunion’s Award, we began by looking at the society’s objectives and decided that we wanted to help inspire people in the hospitality industry through providing a unique opportunity for learning and advancement to help them follow a career in food and beverage services and who also to have the potential for full membership of the Reunion. The Award is open to anyone working full time, at a supervisory or management level, in food and beverage services in the industry, within the United Kingdom. I am very pleased to report that since the launch of the Award in November 2016, we have successfully awarded the prize to the first winner, Raul Martinez. I was delighted that IoD Director General, Stephen Martin, assisted me in the presentation of the prize at the Langham Hotel in November 2017.

May I remind you that the application for 2017/2018 is available online?

I would encourage members to place the Award URL on your intranet and encourage any members of your teams to apply.

Last year’s Award’s panel was composed of Alison Frith, Theresa Maw and Wallace Vincent chaired very successfully by John Cousins. I am very grateful to them for giving their time and effort. We are delighted to have received the support of several members’ establishments who are offering placements to the winner of the Award. Raul has already completed some of his placements this year.

In my third year as President, we began with AGM at the National Liberal Club followed by a wonderful dinner, and once again, I am very grateful to Past President Simon Roberts for his generosity as he is hosting the Reunion once again tonight

In April, our second dinner took place at Brian Clivaz’ wonderful Devonshire Club where their restaurant was closed exclusively for the Reunion. The food and wines were fabulous.

The supper in May was held at the Victory Services Club organised by Gastronome Mark Field and hosted by their Chairman, Air Commodore Nigel Beet who talked about the recently completed refurbishment of the Club. A remarkable dinner served with a selection of wonderful wines from South Africa.

In June, our summer outing took place at Lime Wood Hotel & Spa located in the New Forest. Vice President Wallace Vincent took over the helm and Fellow Gastronome and past Committee Member, Kenneth Spier hosted members and guests extremely well. After lunch, they we were given a guided tour of the property.

Reunion des Gastronomes. And this year we were delighted Brian Clivaz was able to host us at his iconic L ’Escargot. London’s oldest French Restaurant. Following a reception of Laurent-Perrier, accompanied by canapés and the most delicious snails, members and their guests enjoyed a wonderful 4 course menu accompanied by carefully selected wines.

This year’s well deserved best meal of the year was awarded to Brian’s team.

I was very honoured to present the coveted prize at the Annual Banquet.

October’s dinner took the Gastronomes and their guests to heady heights as we ventured to the 35th Floor of the Shangri La at The Shard. The Shard is the first elevated luxury hotel in the city. It is located throughout levels 34 and 52 and is Western Europe’s tallest building. With unparalleled views across London, our host General Manager, Paul Brackley, presented the hotel with an opening address highlighting an incident of having to replace a broken window, which was challenging to say the least at that altitude.

Our 99th Annual Banquet was held, for the second consecutive year, at The Langham, London. The night proved memorable in many ways: a terrorism scare, at Oxford Circus underground (luckily a false alarm) caused total chaos with transport, but most of our intrepid guests managed to arrive in time to enjoy a glass or two of vintage Champagne.  Vice President Wallace Vincent and I welcomed the guests, who included the three finalists of our inaugural President’s Award. They were also joined for a photo with Michel Roux Junior, who briefly stepped out from the kitchen to welcome them.

Our Christmas Service took place, as always, at the wonderful St Georges Church where Reverend Roddy Leece welcomed us. After the service, the gastronome contingent of the congregation adjourned to the Cavalry and Guards Club on Piccadilly for lunch, hosted by Past President David Cowdery. Guests admired the magnificent Christmas tree at the foot of the decorated staircase before moving through to gather and mingle over a glass or two of club champagne, followed by a fabulous lunch and of course Christmas Carols. Let’s not forget the incomparable David Cowdery who took charge of 12 days of Christmas!

We gathered at the RAF in February this year to celebrate the RAF 100th Anniversary. Hosted by Miles Pooley past Committee member who looked after us extremely well. The food and wines were exceptional, and I was delighted that RAF Vice Chairman Air Commodore Rick Peacock-Edwards was able to attend and say a few words.

Finally, and on a personal note, I would like to present my sincere thanks to all members of the Committee and for their support over my three-year Presidency.

I look forward to re-joining the back bench and will continue supporting the working group.

It has been a privilege to be President of the Reunion des Gastronomes for the last 3 years.

I would like to wish my successor a very fruitful Presidency.