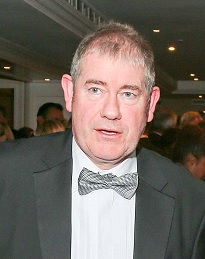 Bill Brogan originally from Lincoln started his career by becoming a Chefs Apprentice at the Eastgate Hotel Lincoln, he then moved to the New Bath Hotel, Matlock and onto the White Hart Hotel back in Lincoln.

Onwards to the Thatchers Restaurant in East Horsley, Surrey, Lainston House Hotel, Winchester as Senior Sous Chef, Four Seasons Hotel, Park Lane London, then Le Talbooth, Dedham, the George Hotel, Dorchester on Thames, and then moved to ICI, based in Cheshire travelling throughout all the sites in the UK looking after the private dining throughout the UK and writing the Cookbook which was the standardised cookbook used throughout the company. From here he moved to P&O, shore based, but it did involve a lot of overseas travel, especially to Finland, Spain and France overseeing 12 ships and being based in Japan for two years.

He joined St Johns College, Cambridge in 2005, where he had to move the hospitality forward, which has been done on many fronts

He has won AA Rosettes, Egon Ronay Stars, held a Michelin Star, won a Catey for Menu of the Year, been twice in the top 3 Catering Manager of the Year, won the Health and Vitality and Honours award for sustainability in 2013 in the Long Room at Lords cricket ground

He has attended Colleges for further development such as Lincoln College of Technology, Buxton High Peak College, Cassio College Watford for advanced pastry, John Moore University, Liverpool. Run Food and wine trips to Europe and China and ran a TUCO (The University Caterers Organisation) to China and running one to Cambridge and Lisbon