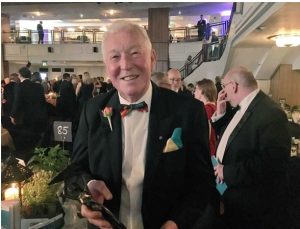 Vic Laws, director, AVL Consultancy who has just won the Public Sector Award at the recent Catey Awards, an accolade for his contribution to the Catering Industry.

Peers describe Vic Laws as a titan of the industry. He is known for speaking his mind and as someone you can trust. He has made a significant contribution to the cost sector and achieved a long list of accomplishments over his career.

Laws began his hospitality career working in the kitchen of the Acton Hotel School (now part of the University of West London), then moved into a trainee manager role at the Mount Royal Hotel on Oxford Street in London, part of

Grand Metropolitan Hotels. His next stop was local government restaurants and banqueting in St Albans, Coventry and Southend.

Laws changed tack to sell prepared foods to colleges, prisons and hospitals, before taking a job as director of flight catering at Trust House Forte. After a spell as managing director of airport services at Grandmet, he joined Aramark in 1983, where he won the catering contract for Wembley Stadium from a contractor that had held it for 57 years.

He set up AVL Consulting in 1986 and was involved in the creation of catering companies Mediclean (now ISS) and Taylorplan (which became part of Sodexo). At the end of the 1980s, AVL Consulting was appointed administrator of the Local Authorities Caterers Association, and subsequently added the administration of the Association of Catering Excellence and the Foodservice Consultants Society International to its books.

Laws was awarded an MBE for his services to the catering industry in 2011 and has continued to make his mark, particularly as a restaurant ambassador for the Clink Charity, set up at Her Majesty’s Prison High Down, in Sutton. He has been integral in the roll-out of three other Clink restaurants. Matthew Merritt-Harrison, managing partner of Merritt-Harrison Catering Consultancy and a judge for this category, has worked with Laws, and said: “We shouldn’t forget in addition to everything else he does for the industry, Vic is a fantastic consultant and his projects always exceed his client’s expectations.” Mary Wedge, account director at Caterlink and a fellow judge, added: “I first came across Vic many years ago in the care sector and he has always been supportive in terms of time, commitment, knowledge and sharing information.”

In an interview with The Caterer in 2012, Laws talked about making the best first impression and the importance of reaching out to others in the sector.

As an outspoken and ever-present figure in hospitality, Laws continues to be at the centre of the industry. He is a member of the Institute of Hospitality and the Royal Academy of Culinary Arts, and a conseiller culinaire for the Chaîne des Rôtisseurs’ Young Commis Chefs Competition. It seems nothing can stop this man from being involved – and long may that continue.

What the judges said

“Vic is an outstanding candidate and this award could have been made for him.”  Roger Kellow

“Tonight’s winner is not only an icon of the public sector industry, but is someone who also helps others to develop their careers.” Andy Jones

“Vic is an influential consultant who has had a significant impact on improving food standards in school meals across the UK.” Matthew Merritt-Harrison

“I met Vic 1981 and he hasn’t changed. He has always been a character, but is completely supportive of this industry.” Derek Johnson