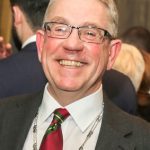 I am delighted to invite you to the 100th Annual Banquet which promises to be a truly memorable evening, held in the stunning venue of Drapers’ Hall, conveniently located close to the Bank of England in Throgmorton Avenue.  Set beneath the dramatic ceiling paintings, depicting Shakespearean scenes by 19th century artist Herbert Draper, the Livery Hall is undoubtedly one of the City’s finest dining rooms.  The beautiful room displays the Drapers’ Company’s collection of royal portraits and some of the larger pieces from its silver collection.  The Livery Hall’s dining furniture includes rail back chairs, over half of which date back to William IV.

A glittering reception generously supported by Family Taittinger will precede a sumptuous dinner accompanied by fine wines.  To bring the dinner to a fitting close, Taittinger Nocturne Champagne will also be served.  The Guest of Honour will be Cyrus Todiwala OBE, DL and he has kindly agreed to present the President’s Award to one of three finalists in attendance on the night.  I very much hope that members and their guests will attend this truly ‘once in a lifetime’ evening and I very much look forward to welcoming you to Drapers’ Hall. 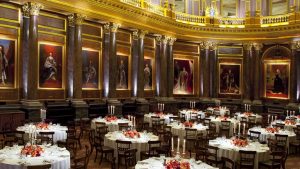 Booking form attached and Menu and Wines to follow.

Cream of cèpe and truffle oil