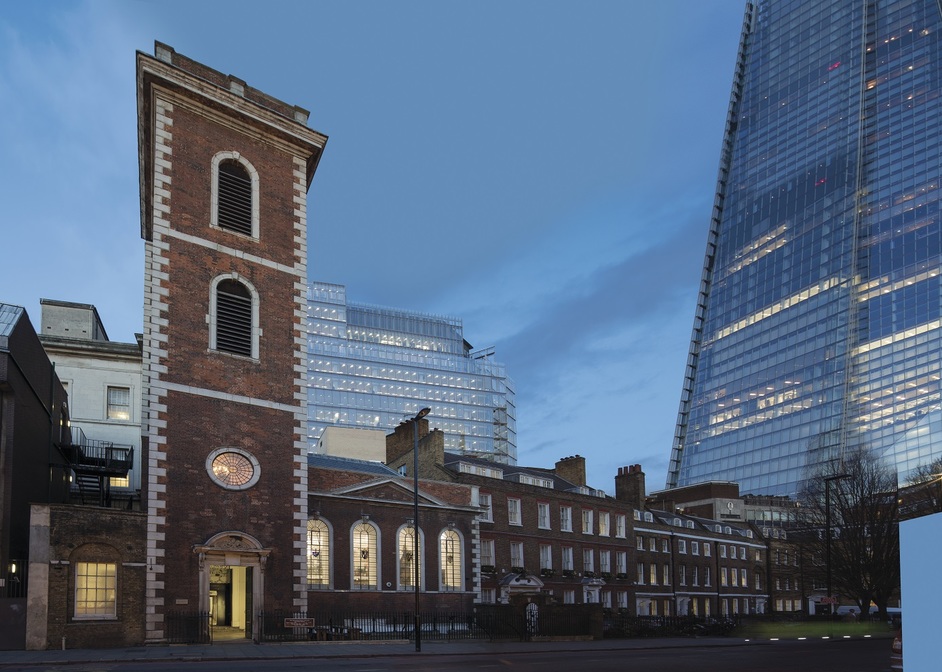 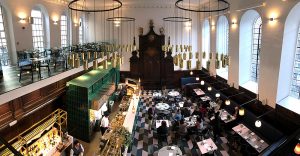 We don’t usually have an event in August but the opportunity arose, courtesy of fellow Gastronome Gerard McCann, (who was their interim General Manager) to lunch at Duddell’s, the award-winning Chinese restaurant that recently opened its very first branch outside Hong Kong, here in London.  And it was a sell out event.   The head chef is Daren Liew, who was previously with the Hakkasan Group and is widely experienced in Chinese cuisine.

The original Duddell’s was founded in 2013 and boasts a Michelin star. Its London restaurant is housed in an historic Grade ll listed site just near London Bridge – St Thomas’s Church. This spectacular building has been equally spectacularly, and sympathetically, transformed into a unique restaurant. The building dates back to 1212 when it was the infirmary at St Mary Overie priory.  The present building was originally part of St Thomas’s Hospital and designed by Thomas Cartwright in 1703, but it became redundant as a church in 1899 (coincidentally the same year as the first meeting of the Réunion). It houses an Old Operating Theatre Museum upstairs, which is open to members of the public.  There is an open dim sum kitchen and a beautiful mezzanine with glass panels, allowing diners to view the whole restaurant below.  It was on this mezzanine that we gathered for our lunch.

Starting with a delicious cocktail of Strawberry Punch (Beefeater 24, Umeshu liquor, Acai liquor, raspberry, homemade eucalyptus oolong tea bitter), we had plenty of time to mingle and network, while admiring the stunning Queen Anne interior from a bird’s eye perspective. 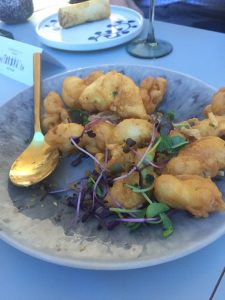 Due to the layout and with the guests being seated on two long tables on different sides of the mezzanine, our President Wallace Vincent sensibly decided that it was too public a space for the usual grace and guest introductions.  Prior to being seated he welcomed everyone, introduced himself and then general manager Neil Rivington, who said a few words about Duddell’s.

Neil explained how careful the company had been in the design to keep the character and history of the building.  He invited guests to visit the museum upstairs after lunch and explained that, like the Hong Kong original, the London restaurant was hosting exhibitions of the works of various artists; the ‘Doubting Thomas’ exhibition being the current one.  This has work by internationally renowned artists and reflects the story of St Thomas, who was given that moniker due to his doubting the resurrection without personal experience. 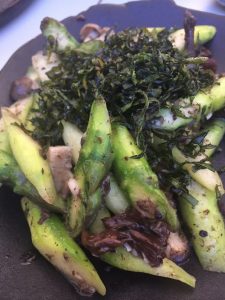 Seated at long tables, we enjoyed starters of Truffle spring roll and Salt & Pepper Squid with Hon Shimeji mushrooms.  The truffle element in the spring roll was an unusual but excellent marriage of Asian and Western ingredients.  According to Gastronome Christine Yau, truffles are rarely found in Chinese cooking, but guests agreed they added another dimension to the humble spring roll.  The squid was delicious, with the straw mushrooms surrounding the plate,  and was enjoyed by all.  The 2016 Acustic Blanc, Acustic Cellar, Montsant, White Priorat was a fabulous match.  It was refreshing, with much complexity and intensity.

The main courses were Martell black pepper beef, sweet & sour Cointreau Berkshire pork and sautéed asparagus with wild mushroom in black truffle sauce. These were served with egg fried rice with spring onions.  The beef was sensational.  It melted in the mouth and had a subtle barbecued flavour.  The pork was another fine example of the expertise in the kitchen and the additional of truffle again, in this case with the asparagus was clever and gave it a further dimension.  The asparagus was sliced and cooked very al dente, resulting in a delicious, crunchy vegetable accompaniment, and the rice was the ideal backdrop for the diverse flavours.  The wine match here – a 2016 Chateau Pesquié, Terrasses Rouge, Ventoux from the Rhone Valley (“Amazing stuff from the Ventoux!” R. Parker) was full flavoured, with a spicy and long finish, and another great pairing by the sommelier. 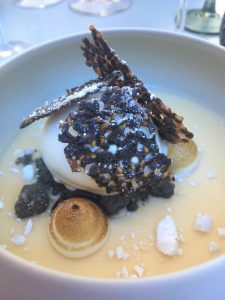 For dessert we were served Yuzu tart sesame sable, yuzu ice cream, black sesame crisps.  Served with a 2016 Nivole Moscato d’Asti, Michele Chiarlo, this Piedmont sparkling was an even better pairing than the previous two!  It really was a perfect combination; the dessert was rich but not too much so, and the crispy black sesame added texture and depth to the other components.

As everyone adjourned, it was agreed that this was a particularly convivial, relaxed and delicious summer interlude at a unique and fascinating venue.