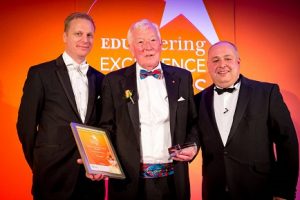 Vic Laws has had a long and varied career, with many professional achievements, but they have also made many lasting impressions through his personal connections to people in our industry, making him a well-liked and respected individual.

He began his career at the Acton Hotel School, now part of the University of West London, and moved into a trainee manager role at the Mount Royal Hotel in London, before moving into the public sector, working in local government restaurants and banqueting in St Albans, Coventry and Southend.

A career change then came about, selling prepared foods to colleges, prisons and hospitals – getting his first taste of working away from the day-to-day hustle and bustle of the kitchens. He then worked as director of flight catering at Trust House Forte, then managing director of airport services at Grandmet. But the days of airlines were over when he joined Aramark in 1983, where they won the catering contract for Wembley Stadium from a contractor that had held it for 57 years.

In 1986, he set up his own consultancy company where he helped to create Mediclean – now ISS – and Taylorplan (which became part of Sodexo).

The end of the decade saw him begin his work with school meals, becoming administrator to LACA for many years. His dedication to school catering has been witnessed first-hand by many colleagues, always there to offer advice but there to challenge, too. At conferences and seminars, when it comes to the time for questions, he can always be relied upon to ask searching questions and make the speaker sweat a bit!

While this is a Lifetime Achievement Award, implying he is of a certain age, he is particularly au fait with technology and followers on Facebook and Twitter are witness to almost daily updates informing us of where he has been and made jealous of the numerous posts of the epicurean meals he has eaten.  Along with images of a rather nice new red motor he has just taken receipt of!

Vic likes a good meal out and likes nothing better than drinking champagne, even better when he gets to sabrage; opening bottles of champagne with one thrust of a sword is his special skill!

His personality and work ethic towards the hospitality sector hasn’t gone unnoticed, with him being awarded an MBE for his services to the catering industry. Outside of school meals, he is a restaurant ambassador for the Clink Charity, helping to set up the restaurant at High Down Prison and the roll-out of three other Clink prison restaurants. He is a member of the Institute of Hospitality and the Royal Academy of Culinary Arts.