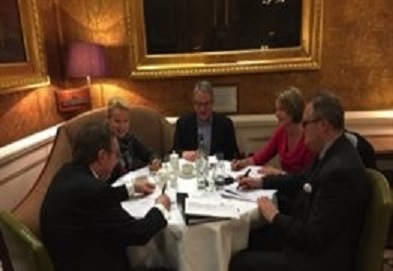 The judging panel for the inaugural Réunion des Gastronomes Award has now met to consider the entries, and has selected five candidates for the initial shortlist. There is a wide range of establishments represented in the line up: London Clubs, an hotel, a Michelin-starred restaurant and a prison rehabilitation and training charity project.
The shortlist comprises: Yacine Bezegouche, restaurant and bar manager at The Hilton Bankside; Sonal Clare, restaurant manager at Purnell’s in Birmingham; Paul Clarkson, head chef trainer at The Clink, Brixton; Raul Martinez, brasserie manager at The Arts Club and Brian White, F&B manager at The Victory Services Club.
“We were very pleased with the number, and calibre of entrants,” said Serge Pradier, President. “Especially considering is the first year of our new award.
“The shortlisted candidates have been invited to meet the panel in person for individual interviews later this month at the Institute of Directors, where they will be welcomed by me. Afterwards they will enjoy a reception and lunch and will be given a tour of the IoD.”
From this interview process, a maximum of three finalists will be selected. The finalists will be invited by panel members to be their guest at one of the monthly events organised by the Gastronomes. There will then be a further interview by the panel, from which a decision will be made on the winner.
All finalists will be invited to the Annual Banquet in November, at which the winner will be announced. The winner receives the opportunity of four two-day placements (or stages) with expenses covered, across a raft of different industry sectors. He also receives invitations to attend five Gastronome events in the year after his award as well as mentoring and networking opportunities throughout from the membership. In addition he will be given Associate membership of the Réunion des Gastronomes for up to four years. “The total prize value for the winner is believed to be worth in excess of £3,000,” says Pradier, “but the mentoring and potential career enhancement he will be offered as a result of his prize is priceless.”
The judging panel comprised: Alison Frith, managing director of Artizian Catering Services; hospitality consultant Theresa Maw; Wally Vincent, Executive Secretary designate of the Master Innholders and vice president of the Réunion and chair of the judges, John Cousins, director of The Food & Beverage Training Company.

ENDS
Photo shows (L-R) judging in progress at the Institute of Directors John Cousins, Theresa Maw, Wally Vincent, Alison Frith, Serge Pradier
For further information and high res image, please contact Alison Jee on 020 8744 0744 or alison@alisonjee.co.uk
Editor’s note:
The Réunion des Gastronomes was formed officially in London in August 1899 with the object of endeavouring to raise the standards of hotel keeping and catering; of promoting stability of employment; and of exchanging ideas and opinions of value on all questions concerning the profession. Made up of many of the senior figures from the hotel and catering industry the objects are as important today as they were then.
The organisation continues its mission to develop, support and promote the culinary arts.