Church Service and Lunch at The Chesterfield December 2014 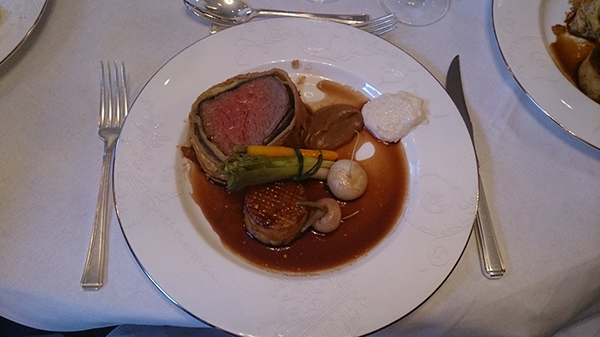 As we approach the festive season at the end of 2014, members were delighted to have received two invitations on the same day.

Firstly, our Chaplain and fellow Gastronome Father Roderick Leece, once again extended the warmest of welcomes for us to join him at St George’s, Hanover Square Church. Matins for the second Sunday in Advent included music specially selected for the occasion including an opening organ recital and truly heavenly choral singing by the Choristers of St George’s.

We then walked the short distance to The Chesterfield Mayfair where General Manager Oliver Raggett and his team were waiting to welcome and serve us with the most wonderful Sunday Lunch.

The champagne reception was held in the main bar, accompanied by a selection of canapés carefully chosen and prepared by Ben Kelliher, Executive Chef. We then moved upstairs to the Royal Suite where luncheon was served.

The starter was a plump smoked salmon parcel generously filled with crab meat, served on slices of pickled cucumber and topped with a salad of micro herbs. It was simply delicious, and the accompanying Sauvignon Blanc, Bouchard Finlayson, Walker Bay 2013 displayed all the fresh fragrance that is typical of the best of South Africa’s Cape vineyards For the main course we were served a traditional Beef Wellington. The well-hung and succulent beef fillet was served pink, as it should always be, and it would be no understatement to say that it certainly melted in the mouth. The fondant potato, baby vegetables and Madeira jus were all very carefully prepared, and this was an extremely well balanced dish.

To accompany such a wonderful Beef Wellington, we were treated to yet another wine from the vineyards owned by the Tollman family who also own Red Carnation Hotels, of which The Chesterfield Mayfair is a member. Their Hannibal, Bouchard Finlayson, Walker Bay 2012 is a masterful blend – mainly of Sangiovese and Pinot Noir, with smaller quantities of Nebbiolo, Shiraz, Barbera and Mouvedre. For the dessert, we were treated to yet another tried and tested favourite – marrying dark chocolate with raspberries. The chocolate tart was light yet full of flavour, and it was perfectly set off by the sweet sharpness of the raspberry sauce, and topped by a quenelle of delicious Chantilly cream. Tea and coffee were served with a selection of macaroons, which made the ideal end to such a sumptuous Sunday lunch.

Gastronomes and their guests were then entertained by four Choristers from St George’s who sang a selection of carols and Christmas songs, completely unaccompanied by any musicians. They did not sing entirely on their own however, as the event ended with Gastronomes joining in to give a very hearty rendition of The Twelve Days of Christmas!

Philippe Rossiter, President Réunion des Gastronomes then formally thanked Oliver, Ben and all their staff, and the Choristers, for making this such an enjoyable pre-Christmas event. He then announced the results of the charity draw, where the winners were Simon Roberts and Hester Sparrow. The President’s chosen charity – for Westminster Kingsway College and other colleges to assist any hospitality students as they felt appropriate – benefited from a generous donation of £455, to be added to over £4,000 already raised during Philippe’s presidency.