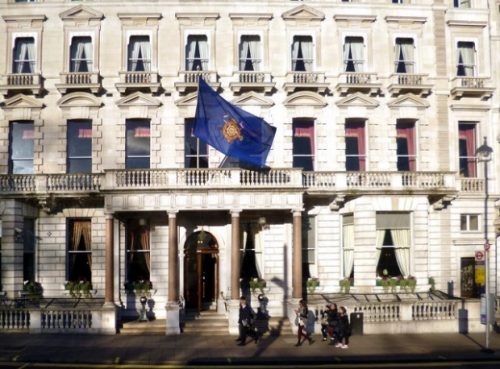 We are delighted that once again our Chaplain and a fellow Gastronome Father Roderick Leece,13th rector of St George’s, has invited us to join him in celebrating the start of the Christmas Season. History of the Church In the latter years of the 17th Century, London enjoyed an increase in prosperity, which resulted in a rapid growth of population. New and elegant suburbs began to cover the open country to the westward. There was very soon a need for the readjustment of Parish boundaries and for new places of worship. To meet this, in May 1711, Parliament passed an Act for the erection of fifty new churches in and about the Cities of London and Westminster. Ten years later the building of St George’s was begun on a plot of ground given by General William Steuart. The architect chosen was John James, one of Sir Christopher Wren’s assistants. The first stone was laid on June 20th 1721, by General Steuart, who, after striking it with a mallet, poured out a libation of wine with the words “The Lord God of Heaven, preserve the Church of St George”. After this auspicious start, the Church took three and a half years to complete at a total cost of £10,000. It was consecrated by Edmund Gibson, Bishop of London, on March 23rd, 1725. The patronage was vested in the Bishops of London, and the first Rector was Andrew Trebeck, Vicar of Croydon. The new Parish was carved out of that of St Martin-in-the-Fields and covered an area stretching from Regent Street (then called Swallow Street) westward to the Serpentine, and southward from Oxford Street to include the whole of what is now Mayfair, Belgravia and Pimlico. The countryside then came in close to the Church and in 1725 it was still possible to shoot woodcock in the Conduit Mead a few hundred yards from St George Street and snipe at the western end of Brook Street. St George’s had been fortunate in those who have cared for it over the years. Faithful parish priests and understanding architects showed such respect for John James’s design, while gently enriching it, that a parishioner from two centuries ago, if he could return today, would not find much to startle or dismay him. Indeed he might rejoice that his former spiritual home is still tended and loved, and that people of a later generation still find in it that source of strength which springs from the ministry of Word and Sacrament, and the fact that a man-made building can be the outward and visible sign of God’s presence with His people.

For the first Sunday in Advent, 3rd December, the music for the Sung Eucharist will be Missa Brevis in F (Haydn)and the anthem will be And the Glory of the Lord (Handel). Handel was properly the best known parishioner of all times. He came to live in Brook Street in 1724, just as the church was nearing completion, and almost at once he was involved in the affairs of the new parish. His opinion was sought on the suitability of the organ, and when candidates for the post of organist were being tested, he supplied a theme for extemporisation. From then onwards he had his pew in the church and was a regular worshipper. The Organ Voluntary will be Offertoire sur les grand jeux (Couperin)
The service will be followed by lunch hosted by Past President David Cowdery and we will be entertained by the choir from St George’s singing carols.