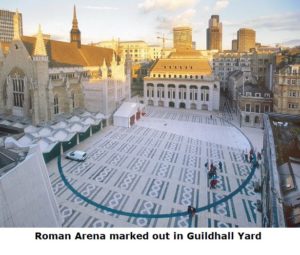 You may have missed the best access to the Guildhall Club, for sure you may not have realised just how much history your footsteps were treading.

Had you left the underground from Mansion House Tube station you might have walked up Bow Lane passed the famous St Mary le Bow (Bow Bells) and crossed the historic Cheapside. Turning into King Street the famous Guildhall of London would be straight ahead of you. A view only afforded in recent years. Previously like most of the City, Livery Halls were hidden behind gated walls or shop fronts for trading. The renovation and creation of the Guildhall Yard is relatively new, and the rich mosaic of pavements and tiling are very significant. There is a roundel of black tiles which outline the Roman Amphitheatre only found in the late 1980’s early 90’s. This changed dramatically the understanding of Roman Londinium.

Please click on the link for a brief history.

Once you enter Guildhall Yard with the oldest part of the building facing you, note that to your right is the Library and Museum – well worth a visit and especially watch out for special exhibitions. To your left the west wing – offices and the Guildhall Club and City Corporation meeting rooms. To the north of the ancient Hall, the Chamberlain’s office and Court (where Freedom of the City of London ceremonies take place) and more offices of the City Corporation.

Our first Dinner of the year was hosted by Gastronome, Mark Grove, Past Master Worshipful Company of Cooks and owner of The Cook and the Butler Catering Company. The Dinner took place in the Private Dining Room of the Guildhall Club, overlooking the famous Guildhall Yard.

The occasion was to be primarily marked as a tribute to Gastronome, Keith Patterson and we were delighted to be joined by members of his family and friends that had attended several previous Gastronomes events. An address was supplied by dear friend and business partner, Gastronome and Past President Christopher Briere-Edney 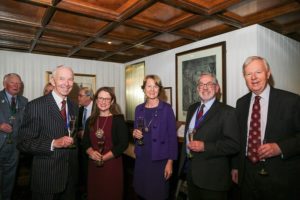 The Gastronomes were also delighted to welcome Virginia Bond, Dip COT, Master of the Worshipful Company of Cooks and the Clerk, Vice Admiral Peter Wilkinson, CB CVO. They had been invited to receive the Wolsten-Croft Trophy which had been.n the custody of Past President Wallace Vincent, MBA, FIH. 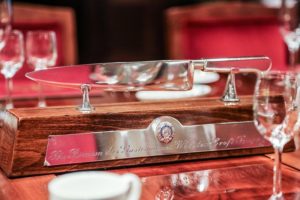 The trophy and its history may be read here CLICK 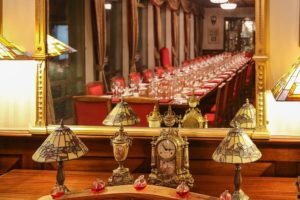 The elegant Board Room Style room dominated by the huge centre table and showing the City Corporation Livery on the tableware, richly complimented by twinkling red lanterns. Dinner was called and seats were taken. After the President, Alison Frith’s formal welcome, Past President Wallace Vincent said Grace.

Our first course – Grilled Fillet of Black Bream, Puree of Beetroot & Cucumber, a Dill Reduction and Green Olive Pesto complimented by The Club Chardonnay – refreshingly light and zingy enhancing the multiple flavours on the plates before us. 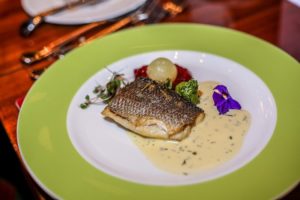 Thankfully no carving or negotiating any bones the Woodcock had been butchered and de-boned allowing for the delicious stuffing. Not only did the plate presentation delight the eye it also tickled the palate and was equally stimulated by the Claret. 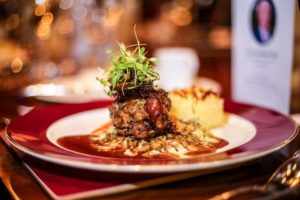 As we ventured on our next eye feast consisted of a Dark Chocolate Fondant, Orange Toffee Sauce, and a White Chocolate Ice Cream. The centre of the warm Fondant oozed a wonderful dark chocolate syrup that stimulated the palate with its luxurious decadent flavours. The light and delicate Muskat Ottonel Late Harvest 2016 Julius Hafner, Mönchhof Neusiedlersee, Austria added a cutting edge to the collation before us. 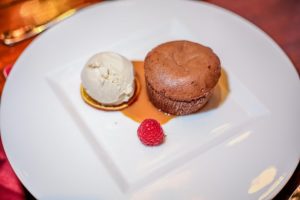 Sante du Chef and Service was called to Chef Jean Deillon and Brigade and Amber representing the Front of House team. 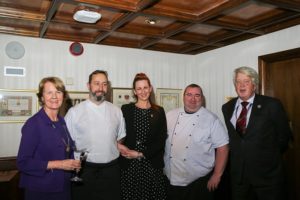 Formalities ensued with the President calling for a glass to be raised to ‘The Queen’ – Vice President William Brogan called a toast to the Guests, Secretary Vic Laws to the Town Members, Gastronome, Andrew Gosling to the Country Members and Gastronome, Ian Pask to the Retired Members. 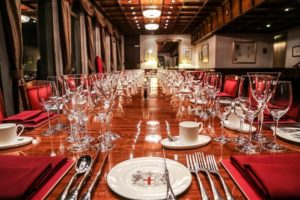 Camaraderie and conversation continued with a final farewell from the President thanking all who had attended and wishing a safe journey home and looking forward to our next gathering in February at Mosimann’s in Belgravia.