It would be appropriate that the Gastronomes would host a Burns Night when they returned to the Caledonian Club in October 2021 for its Annual Banquet. A Dinner which should have taken place earlier in the year, but for the Covid Pandemic and the closing of all facilities and a lockdown for the nation.

One couldn’t help but notice that instead of a dark Winters night, it was a lovely autumnal evening. Whether you arrived at the Club from Belgrave Square or Grosvenor Place you would have been heartened by the sound of the pipes wafting in the air being played at the entrance – calling us to our gathering and dinner.

On the steps. of the Caledonian Club was piper Roddy Livingston. On arrival we were directed to the Drawing Room and greeted by President, Alison Frith and Vice President, Bill Brogan with their respective partners Paul and Jinzhao Li.

We were further welcomed by bubbling glasses of champagne, Nicholas Feuillatte, and a collation of canapes to stimulate our palates. It was so nice to see so many familiar faces once again, vibrant with enthusiasm at the impending evening ahead of us – of food and wine – an opportunistic celebration.

We were reminded that the Reunion des Gastronomes was formed officially in London in August 1899 just 122 years ago. Endeavouring to raise the standards of hotel keeping and catering. Promoting stability of employment and of exchanging ideas and opinions of value on all questions concerning the profession. This mantle has been emphasised over the last 18 months when the industry has faced one of its toughest challenges in many years. On another historical note. The first Burns Supper was held in 1801. In the 220 years since then, new traditions have been added, but the sentiment remains the same, to pay tribute to Scotland’s National Poet.

Once we had all gathered and friendships re-established, order was called by Brigadier Tweedy Brown CBE who summoned us to follow the Piper to dinner, in the traditional way. Arriving in the Dining Hall we took our places. A short introduction and welcome by President Alison Frith. Followed by Past President, David Cowdery saying Grace in a true Scot’s fashion.

We were served a light cock-a-leekie consommé, followed by Loch Duart hot Smoked Salmon with a Celeriac and Apple Remoulade that was accompanied by a beautiful Sancerre, Domain Cherrier, 2018.

Then onto a point of ceremony. Brigadier, Tweedy Brown CBE, stood to receive the Piper and Chef, carrying in the Haggis. Due ceremony was performed with an ode by Robbie Burns then the cutting of the haggis. This was served with the obligatory Neeps and a Wee Dram of Whiskey.

A small interlude of highland dancing with swords, with the dance troupe sporting brightly coloured kilts, swishing feverishly as they bobbed up and down on their toes. Then on to the main course, a Fillet of Scotch Beef, a Melange of Green Vegetables, Baby Carrots. Dauphinoise Potatoes and a Red Wine Jus, accompanied by a Chateau Le Prieur, Bordeaux, 2016. The dessert of Ecclefechan Tart (a Tart of Dried fruits and Rich Muscovado Sugar) with Club Malt Ice Cream complimented with a Muscat de Saint Jean de Minervois was a delight.

The hilarity and joy of the evening was emphasised by raised voices of chitter chatter on each table as everyone exchanged their experiences of working or lock down over the past months. Coffee was served with Petit fours.

Toasts: The Queen, by Past President, Graham Bamford, FIH, MI – The Guests, who included David Grunwerg and his wife Hilary, who had generously bought the auction prize of a Burns Night Dinner with the Réunion des Gastronomes. The Gastronomes had donated the tickets to Hospitality Action and raised nearly £1,000: proposed by Vice President William Brogan FIH

Subsequently finishing with a Farewell by the President, with all concluding it a splendid evening. We drifted into the autumnal fresh air, wending our way home, looking forward to our next gathering in November.

Hopefully we can establish a ‘new normal’ and continue with our monthly gatherings, sharing each other’s experiences, professional advice, mentoring and helping other colleagues in this Great Hospitality Industry. 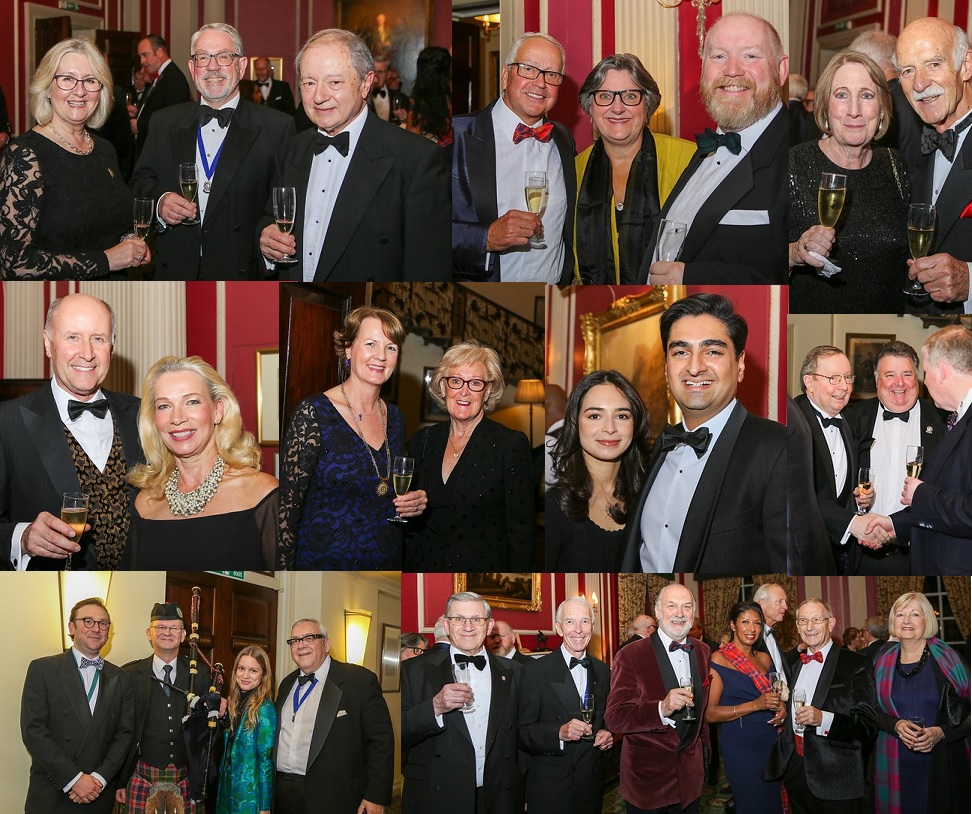