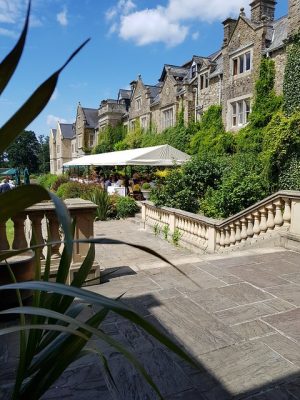 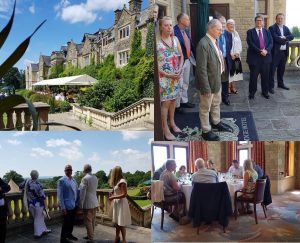 The Reunion des Gastronomes Annual Summer outing is always something to look forward to, as those who make the effort to attend will affirm. It offers a whimsical excursion to venture outside the bounds of the West End and City, stepping away from the whirlwind of our busy lives to visit the shires. This year we ventured to South Lodge and Spa, one of the Exclusive Hotels Collection near Horsham in West Sussex. A rather lovely hotel with a collection of renowned restaurants and a Spa. Our Summer Outing offers a unique opportunity for members and their partners to enjoy an ‘away day,’ and enjoy each other’s company away from the hustle and bustle, negating the usual formality of monthly dinners, and a tradition that has been built up over many years.

For some, our journey began at the historic and familiar Caledonian Club on the edges of Mayfair, where we gathered for morning coffee and pastries before alighting the organised transport and heading for Horsham. The weather was promising sunshine and blue skies, and thankfully the transport was air-conditioned.

As we cleared London our attention was drawn to the popping of corks, as the atmosphere for the day was laid, with glasses of bubbles being passed as a thirst quencher. Fortuitously we were travelling in the opposite direction of huge traffic queues that were caused by the closure of the M25 and more especially the M23. Our journey nevertheless took more time than expected and our original timed arrival of 11.15, was delayed to just after mid-day. 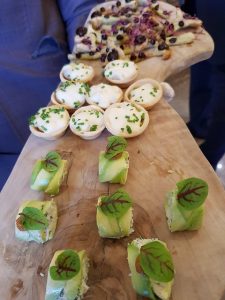 We were greeted by Vice president Alison Frith who was hosting the day in the absence of the President, who had sent apologies. As we gathered and dusted ourselves down from the journey, coffee was available and the gathered group split into two parties, to be given a tour of the Hotel. The Hotel centre being the original house, flanked on either side with extensions built sympathetically to the original brickwork. To the right the extension had added additional accommodation facilities for guests staying, and to the left several suites for corporate and group dining entertainment.

We returned to the reception hall to receive glasses of chilled bubbling Ridgeview, with the option of staying inside or venturing onto the terrace and overlooking the manicured lawns and gardens. A collation of canapes tickled our palates as a prelude to the Luncheon that would follow. Luncheon was called and places were taken. The Vice president welcomed everyone, and grace was said by the Revd Roderick Leece, our Honorary Chaplain who had previously declared, he had not been on a Summer Outing for some 10 years. 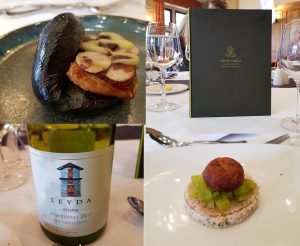 The enthusiasm and dedication shown by the kitchen brigade was emphasised as each course was described and presented by the chef responsible. The Kitchen are proud to present locally sourced foods as well as using ingredients grown in the estate’s kitchen garden. The wines were specially chosen by the General Manager, David Connell MI.

So, our Luncheon began: – 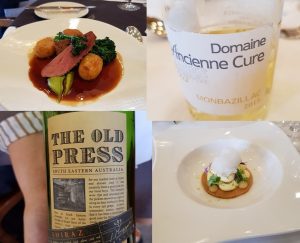 After luncheon we had the option of going on a guided tour of the gardens, and also introduced to the magnificent spa building which was across the lawns from the hotel. It boasts a lovely restaurant with relaxing facilities, the searing sun left a few indoors in the shade being served coffee and tea, and as the others returned afternoon tea was served, with handmade chocolate and pistachio muffins and caramel cake. Time passed so quickly, and it was soon time to get back onto our coach and return to London. Certainly, a good time was had by all and the experience of getting out of the central area of London proved very relaxing and enjoyable for all those who made the effort to attend Reunion des Gastronomes’ 2019 Summer Outing. 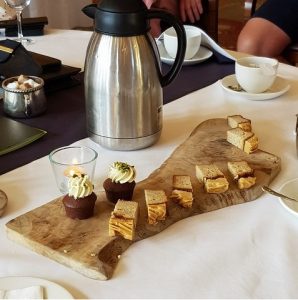