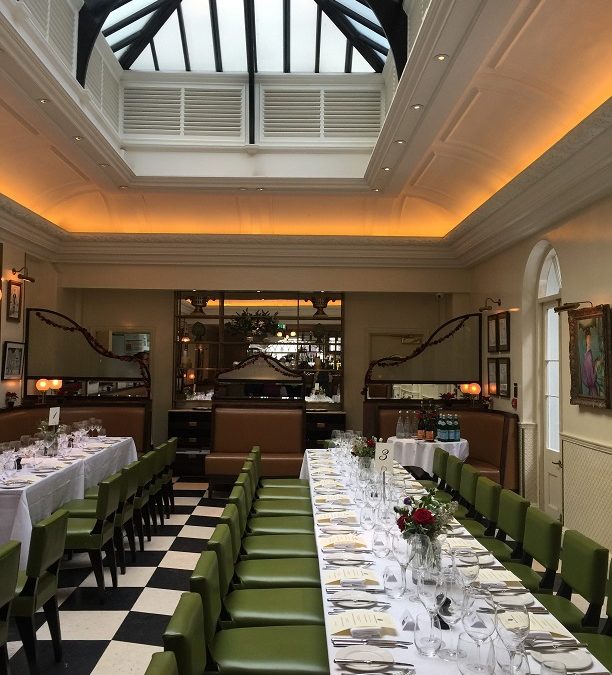 A FABULOUS END TO THE GASTRONOMIC YEAR 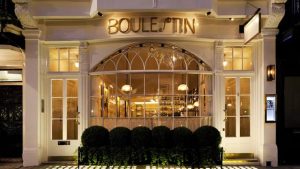 The traditional Gastronomes Annual service took place on the First Sunday of Advent at St George’s Hanover Square, where our Chaplain, and Fellow Gastronome, Reverend Roderick Leece, welcomed the members of the Réunion to his church.  As usual, the choir was in excellent voice and the Missa Sine Nominee (Hassler) was beautiful.  Our President, Wallace Vincent, read the Epistle, taken from St Paul’s Letter to the Romans.  An erudite and challenging address from the Reverend Keith Powell (Chaplain of the Worshipful Company of Cooks) touched on the Second Coming and even included mention of Brexit!

The choir sang Nun komm der Heiden Helland MWV 661 (Bach) and Lift up your Heads from Handel’s Messiah.  The latter was particularly apt, as Handel himself was a regular worshipper at this beautiful church.

After the service, we strolled down to St James’s to join fellow Gastronomes for lunch at Boulestin for a splendid lunch hosted by Past President Brian Clivas.  The ambience of Boulestin is very Parisian, but luckily far calmer than Paris itself on that particular Sunday; the French capital being in lock-down due to the ‘gilets jaunes’ fuel tax protests! 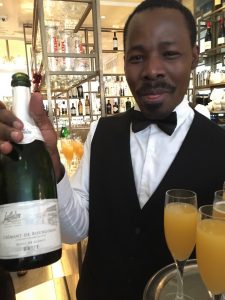 Guests mingled over glasses of Jaffelin Crémant de Bourgogne, smoked salmon canapés and freshly-baked cheese straws, before adjourning to their tables.  After a welcome by Wallace Vincent, our Chaplain Roddy Leece said Grace, and lunch was in full swing.

The starter of charred octopus, nduja and baby fennel was served with 2016 Viña Cartin Albariño, Rias Baixas. This fabulous example of the Spanish wine was a perfect match for the delicious octopus dish.  It counteracted the spiciness of the nduja beautifully, yet still complemented the delicate flavour of the tender octopus.

Next came roast duck breast, braised leg scrumpet, blood orange and tarragon.  The duck was beautifully pink and the scrumpet (an old English recipe) was a delicately spiced and different accompaniment.  The dish was exquisitely crafted, perfectly balanced with nuances of five spice and star anise, as well as the blood orange and tarragon.  The 2015 Gigondas la Reference, Caves de Gigondas that accompanied the main course was an inspired pairing.  It was rich in fruit and tanins, with a warm and harmonic length. 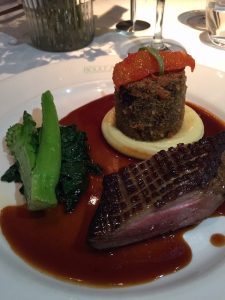 Wallace proposed the Loyal Toast before guests were served dessert of Sauternes crème caramel with drunken prunes.  To quote one guest: “Only a true gourmet would understand how difficult it is to prepare a dessert like that for 60 people and have that consistency.”  It was sublime, and the 2012 Château Petit Vedrines Sauternes that accompanied it was another perfect pairing.

After the ‘santé des chefs et service’ head chef Oliver Leŝnik joined guests for a drink, while coffees, together with miniature mince pies and madeleines, were served. 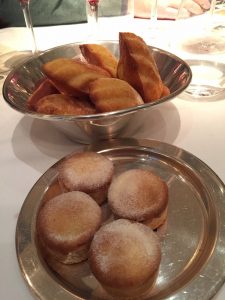 Then, in true Reunion des Gastronomes tradition, guests were entertained by some of the members of the church choir, who sang a selection of carols, subsequently joined for a festive ‘sing song’ by diners.

Everyone agreed that this had been a particularly relaxed, deliciously ‘laid-back’ gathering… and a stonking end to a great gastronomic year! 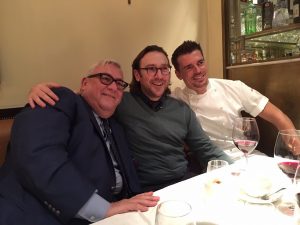 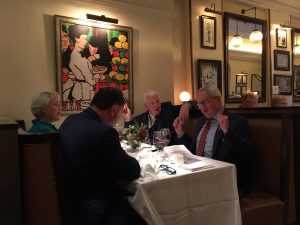