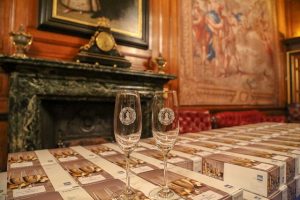 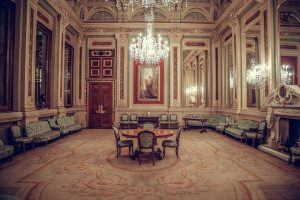 What a night! In the fabulous setting of Drapers’ Hall, we celebrated not only our centennial Annual Banquet, but also the announcement of our second winner of the President’s Award.

The reception was in the Court Drawing Room, with its stunning 19th century décor and furnishings, and the Court Dining Room (the oldest room in Drapers’ Hall, dating back to the late 1660s).  Generous glasses of Champagne Taittinger Brut Reserve were enjoyed with a selection of delicious canapés, including avocado cones, rare beef, foie gras and quail’s eggs. 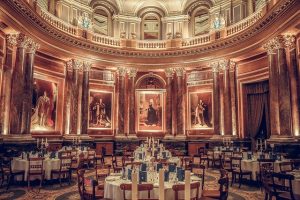 We moved through to the magnificent Livery Hall, with ceiling paintings depicting Shakespearean scenes.  This is undoubtedly one of the City’s finest event spaces, and it was fitting that it was the scene of such a momentous event in the history of the Réunion des Gastronomes.  The room is, apparently, often used in films as a double for Buckingham Palace, and it was certainly majestic. 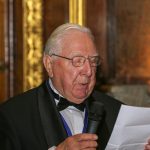 Past President Alan Fairbrass said Grace, and President Wallace Vincent welcomed everyone.  He introduced Guest of Honour Cyrus Todiwala, commenting that he not only has been awarded an MBE and OBE, but he is Deputy Lieutenant of the City of London.

Two new members – Ben Warner from Benugo and Janet Wigley-Clarabut from Compass Group – were welcomed to the Réunion and presented with their badges. 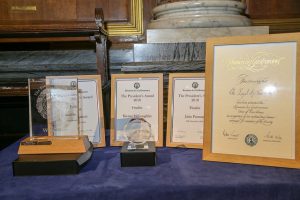 John Cousins, chair of the judging panel for the President’s Award, introduced the judging panel (Alison Frith, Theresa Maw and Serge Pradier) and the three finalists: Andras Lakezi, food and drink manager at the Kimpton Fitzroy London (formerly The Principal London) Kieran McLoughlin, general manager, Hide Ground Floor London, and Jatin Parmar, Old Hall food and beverage manager at Rockcliffe Hall, Co. Durham.  He said that the winner would be announced after dinner, but whatever the result, each finalist was a winner to have done so well in the competition. In fact the judges were so impressed that each of them would be offered professional mentoring by members of the Réunion.

The meal was certainly a testament to the memorable surroundings.  An amuse bouche of cream of cèps with truffle oil was served in a delicate bone china cup and saucer.  It was earthy, rich…and perfect. 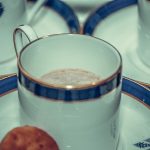 The starter of seared sea bass on a mousseline of English mustard and a prawn sauce vierge was perfectly cooked.  The mousseline was particularly good and added a richer element to the dish.  A Fiano Lunate IGT, Sicilia, 2016, accompanied this.  It was crisp on the palate with stone fruit notes, balanced by a refreshing acidity. 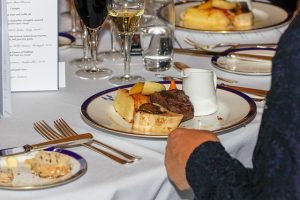 The main course was a triumphant tribute to the best of British fare: Canon of venison with slow braised stuffed bone marrow, roasted beets and pancetta gratin. The venison was pink, the bone marrow added richness, offset by the sweetness of the baby beets.  The Douro Valley Vega Tinto DFJ Vinhos, 2013 was a beautiful example of this Portuguese wine, and it complemented the venison beautifully.

Dessert was Seville orange Queen of puddings with candied fruit ice cream.  It was in fact a trio of sweet indulgence, with the orange jelly providing the perfect sharpness and allowing the flavours to come through in what was, otherwise, a rich dessert.  The candied fruit ice cream was presented in its own chocolate dish.  The Monbazillac – Château Haute Fonrousse 2016 was a great pairing. 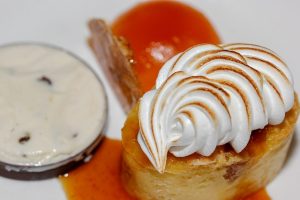 The Loyal toast was proposed by our President, and while guests enjoyed coffee and chocolate gourmandises, Alison Frith, Vice President of the Réunion, proposed a santé des chefs et service. Wallace then announced the award for the establishment hosting the finest dinner in our gastronomic year, prefacing it with the fact that this year, in particular, they were spoilt for choice.  The award went to the Royal Air Force Club, for hosting the fabulous February dinner, which also coincided with the organisation’s centenary.

Wallace then commented on what an honour it was to have so many retired, life members and past presidents present in the room.  He gave a brief history of the Réunion, citing the fact that the society maintains the same aims to this day as when it was formed in 1899. 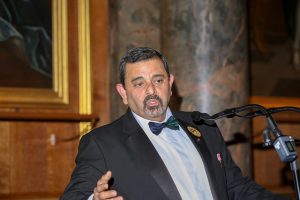 Guest speaker Cyrus Todiwala then spoke about the importance of organisations such as the Réunion and his own initiatives to help our industry.  He commented on how standards have escalated since he arrived in the UK in 1991, and how sad it is that with the challenges presented to the industry our country no longer has a Minister for Tourism.  Our industry links all backgrounds and nationalities, and his own initiatives for the industry have resulted in nearly 1000 young people now being in full time employment.  His competition now has 58 colleges taking part, and this year’s winners are soon to visit India.  He commented that the Réunion mustn’t ever be perceived as elitist: some very great people started it, and long may it continue. 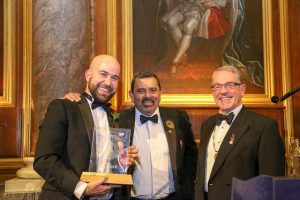 Wallace Vincent joined Cyrus to announce the winner of this year’s President’s Award: Andras Lakezi, who was presented with his trophy.   Wallace commented that all three finalists are ‘hospitality superstars’ and deserving of the award, but ultimately only one could be the winner.

After dinner, guests adjourned to enjoy more champagne – Brut Reserve and Nocturne – courtesy of Famille Taittinger. Appropriately, each guest was presented with a boxed pair of engraved commemorative champagne flutes on departure: a lasting souvenir of a very memorable evening.