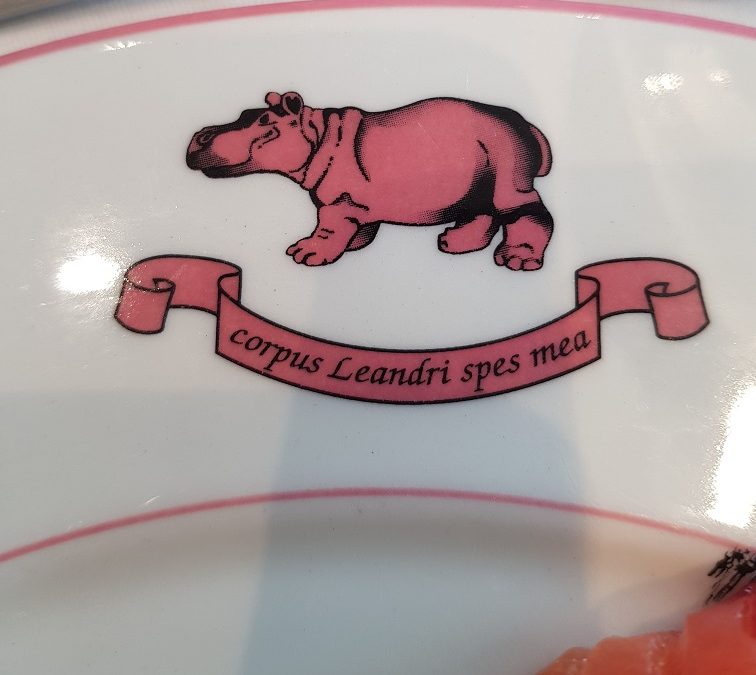 A fabulous day it was for the annual summer outing!  Blazing sunshine welcomed everyone on arrival at Leander Club, Henley-on-Thames.  We gathered on the decking beside the river for coffee… and the most divine flapjacks and shortbread (a strong clue as to the high standard of fare to be enjoyed later). Fellow Gastronome Paul Budd, OBE, the general manager of Leander Club welcomed everyone, and we were then escorted aboard The Waterman, a luxury passenger vessel from Hobbs of Henley. 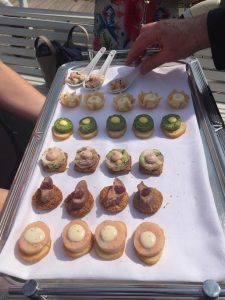 On the open upper deck guests were in a prime position to view the superb properties on the waterfront, including Phyllis Court, and Henley Business School, while motoring up the river.  With Paul Budd and Gastronome Graham Owen (from Phyllis Court) and his wife Nicola on board, we benefitted from highly knowledgeable guides.  Generous servings of Dea Del Mare Prosecco accompanied fabulous canapés: salmon with scallops; lamb with onion jam; chicken roulade; trout with spinach; goat’s cheese and a lobster salad.  We were fortunate enough to draw up alongside, for a bird’s eye view of HM the Queen’s Rowbarge Gloriana, as she was moored up for a forthcoming boating event at the weekend.

Back at the clubhouse, guests assembled for lunch in a private dining room with splendid views of the river.  Reunion des Gastronomes President Wallace Vincent said Grace, and thanked Paul Budd for hosting the event.  Paul then welcomed everyone and mentioned that even though he had been at Leander Club for ten years, it was still a novel experience working there.  He explained how young athletes put their careers on hold to chase the Olympic dream, and that profits from events such as the Reunion des Gastronomes summer outing help youngsters on their rowing journey. Currently celebrating its bicentenary and with 124 Olympic and 3 Paralympic medals to its credit, Leander Club is not only the oldest but the most successful Open rowing club in the world.  2500 people are entitled to wear Leander Pink, which has its own reference Pantone 1777.  The club’s Hippo logo (representing ‘king of the river’) is recognised across the world and two thirds of the athletes for our Olympic rowing come through Leander. 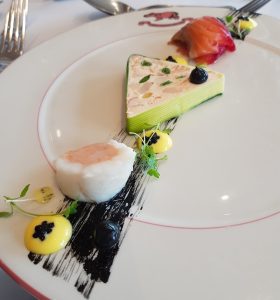 The ‘Trio of Starters’ was beautifully presented and comprised pencil leek & lobster terrine with salmon, saffron dressing, roulade of sole, scallop mousse & beetroot gravadlax.  Tasting as gorgeous as promised by its looks, it was ‘summer on a plate’ and paired well with a Pinot Grigio Via Nova 2017. 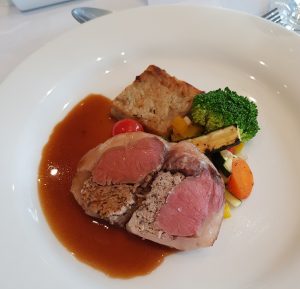 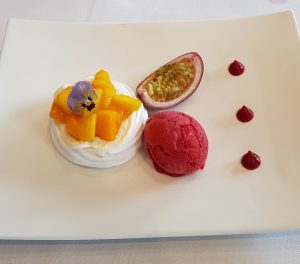 At this point in the meal, Paul Budd presented everyone with a glass of Digby Leander Pink to celebrate Leander Club’s 200th year. 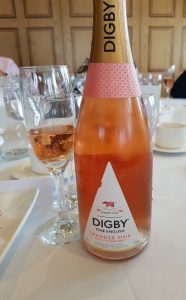 After coffee (and chocolate mints smartly dressed in Leander Pink wraps), Wallace thanked Paul and the Leander Club staff on everyone’s behalf for laying on such a superb event.  He mentioned forthcoming events, including the August lunch at Duddells in the City that is already nearly fully booked.

Everyone was then upstanding to toast the Reunion des Gastronomes, friendship, and success to Leander Club for the next 200 years.

Paul Budd then escorted a number of guests on a fascinating tour of the clubhouse, showing them priceless trophies, Olympic gold medals (yes, the original ones in the early days were solid gold!) and other interesting memorabilia associated with the success of members.  Paul’s knowledge is immense, as is his obvious pride in the club and love of his job. 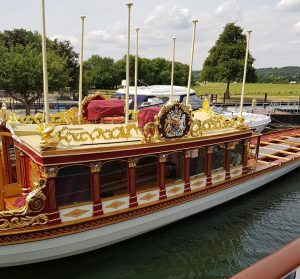 There is a fundraising auction of 200 papier mâché hippos that have been given makeovers by various organisations, athletes, schools and celebrities. Many are currently on display at the club, in various corners of the display cabinets. Anyone interested in finding out more and bidding can do so via the link here.  The auction closes on Sunday 16 September.

It was a great privilege to have been able to hold our summer outing at Leander Club. Everyone who was lucky enough to be able to attend enjoyed a stupendous day, with fabulous food, excellent hospitality – and amazing weather. 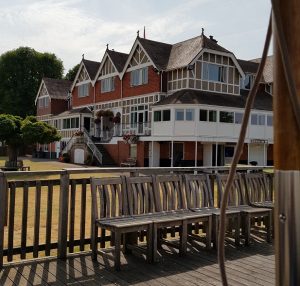