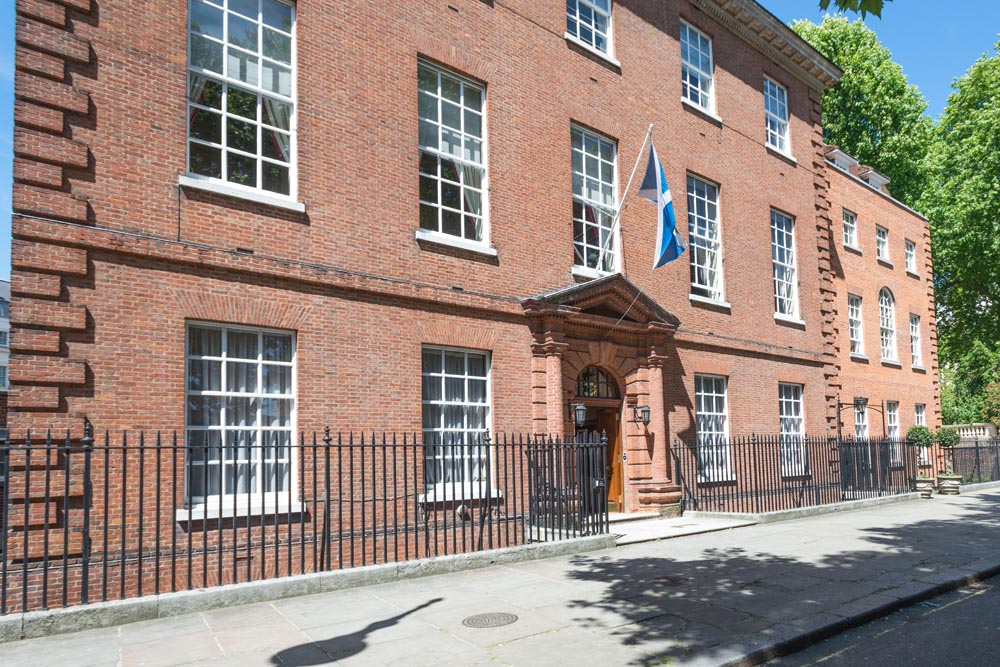 A SCOTTISH-THEMED EVENING AT THE CALEDONIAN CLUB

On one of the warmest evenings so far this year, Gastronomes descended on ‘a little bit of Scotland’ tucked away in Halkin Street, off Belgrave Square.  And of course, being London rather than Scotland, on such a balmy evening it was thankfully midge-free!

This elegant building has been a London home to Scots since just after the Second World War, when it relocated from its previous site – in St James’s – where it had been bombed.  Built in 1907 as a private residence of MP Hugh Morrison to the design of Arts & Crafts architect Detmar Blow, it was the last mansion house of its kind to be built in London. The Club is constantly evolving; Her Majesty The Queen officially opened a new five-storey wing with terrace garden in 2006. 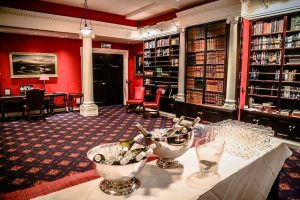 We gathered in the Library, where we enjoyed refreshing glasses of delicious Hindleap English sparkling wine, from Bluebell Vineyard Estates in Sussex.  Generous servings of canapés were circulated. These included: crab tartlets with dill and pomegranate; pork croquettes with apple sauce; asparagus spears wrapped in grilled courgette slices and mini Yorkshire puddings with beef.

On moving through to the Morrison Room for dinner, Grace was said by President Wallace Vincent, who then asked John Cousins to introduce the three finalists for the 2018 President’s Award. They were attending the dinner as part of their prize and the selection process. 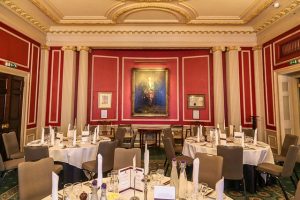 John Herity, Food & Beverage Manager of the Caledonian Club, then gave a brief overview and pointed out that they had a reciprocal arrangement with many other clubs around the world.  The club’s ethos is to be a ‘home from home’ and it has 39 bedrooms, which, unsurprisingly, are particularly in demand during the summer season.

Wallace then invited members to introduce their guests, and new member Diane Rollinson was presented with her badge and members’ booklet.  Wallace also gave details of the raffle, the prize being a meal for two at the Institute of Directors, generously given by Serge Pradier and his dinner guest Stephen Martin, the IoD’s director general. 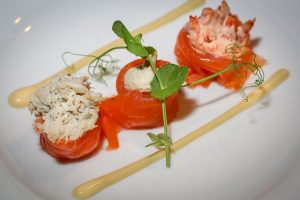 The first course was Loch Var smoked salmon with mackerel, crayfish and crab.  This prettily arranged trio of piscine deliciousness was accompanied by Gustoza Gorgo 2016, from Veneto.  This had a fresh note of apple and honeysuckle, slight acidity and a pronounced mineral note giving good balance and structure to the wine. It paired beautifully with the oiliness of the salmon.

Next was roast sirloin of Scotch beef, served with Dauphinoise potato, wild mushroom and port wine jus.  The tender beef was beautifully cooked and very tasty.  The portion size was perfect, and the green beans and carrots added colour to the presentation, as well as balance to the depth of flavour of the other components.  A Chateau Ducasse 2014 Graves was served with this.  Lightly oaked, medium bodied and very smooth – it was a great pairing for the fabulous beef.

Our second trio of the evening was our third course:  a pretty, dainty and delicious selection of classic Scottish desserts.  Cranachan, in a delicate chocolate cup, a quenelle of honey and Club malt ice cream and a tiny butterscotch tart united to produce a perfect sweet finale.  This was paired with a Mira la Mar Moscatel from Jerez, a pale sherry, amber in colour with reflections of gold. Its intense nose, with notes of grapes and marmalade, together with a sweetness on the palate, was floral and well balanced and powerful enough to hold its own with the desserts… it was very moreish! 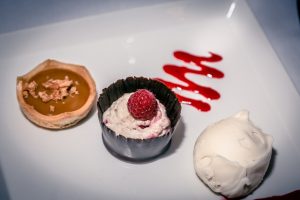 The raffle was won by Gastronome Francois Ginther after which Vice President Alison Frith proposed the loyal toast.  This led into the usual toasts to Country, City, Retired and other members, guests and then a santé du chef and service.

Trio of Scottish Salmon with Mackerel, Crayfish and Crab with preserved Lemon and Olive Oil