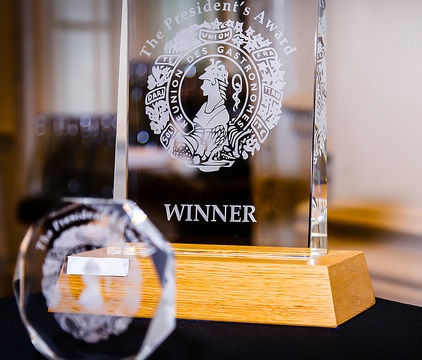 Commenting on the entries, Réunion President, Wallace Vincent  said: “It is only our second year of running this award, and after the success of last year, the calibre and number of entries is going from strength to strength.  We are also pleased at the regional spread of the entries.

“The shortlisted candidates have been invited to meet the panel in person for individual interviews in May at the Institute of Directors. Afterwards they will enjoy a reception and lunch together with the judges and will later be given a tour of the Institute”

All finalists will be invited to the 100th Annual Banquet to held at the Savoy Hotel in November, at which the winner will be announced.

The winner receives the opportunity of four two-day placements (or stages) with expenses covered, across a raft of different industry sectors.  He or she also receives invitations to attend five Gastronome events in the year after the award, as well as mentoring and networking opportunities throughout, from the membership.  Additionally they will be given Associate Membership of the Réunion des Gastronomes for two years.

“The total prize value for the winner is believed to be worth in excess of £3,000,” says Wallace Vincent, “but the mentoring and potential career enhancement presented is inestimable.”

Last year’s winner, Raúl Martinez of The Arts Club, has just completed the first of his stages.  The first was at The Dorchester Hotel Park Lane and 45 Park Lane. The second will be at The Grosvenor House.Park Lane”

The judging panel comprises: Alison Frith, Managing Director of Artizian Catering Services; Hospitality Consultant Theresa Maw; Serge Pradier, General Manager at the Institute of Directors and immediate Past President of the Réunion and John Cousins, Chair of the Judges and Director of The Food & Beverage Training Company.