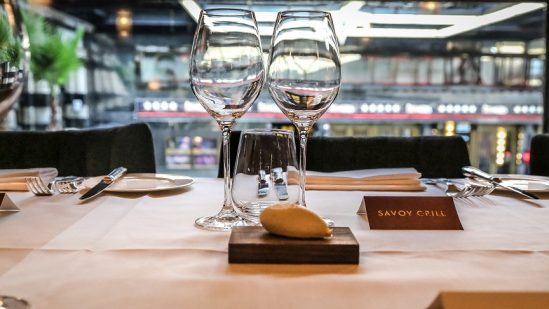 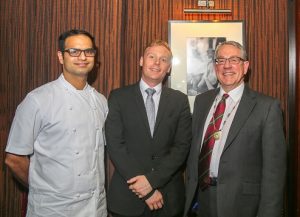 This was Wallace Vincent, our new President’s, inaugural dinner and it was held in the D’Oyly Carte suite – the private dining room above the Savoy Grill. Here, while dining, guests are able to enjoy a bird’s eye view of the comings and goings in front of this iconic building, which is steeped in history.  It was certainly a great venue and a fabulous start to his presidency!

Mingling and networking initially with other Gastronomes and their guests around the vast dining table, glasses of Costaross Rosé Spumante Extra Dry were enjoyed as an aperitif.  This was a fragrant and engaging start to a delightfully relaxed and particularly convivial evening.

After Grace, said by Gastronome Paul Budd, OBE, the members introduced their guests in the customary manner.  It was interesting to note that approximately a third of the diners were guests, many of whom were attending their first Réunion event. 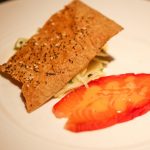 The starter was beetroot cured salmon with raw fennel and clementine salad.  The salad – a typical Sicilian style one – was particularly good as the fennel had been shaved very thinly and consequently was a tender, delicious and fresh accompaniment to the salmon.  This was served with a piece of crisp bread, baked with poppy seeds and a hint of fennel seed, which married well with the salad and the salmon.  This course was accompanied by warm crusty sourdough bread and guests enjoyed a glass or two of Le Grand Noir (Black Sheep) Chardonnay 2016, a mix of 85% Chardonnay and 15%  Viognier from Minervois, Languedoc Roussillon. This was subtly oaked and a prime example of a new wave French wine, combining French regional character with the New World.

The main course was glazed chicken with pomme purée and spring greens.  The chicken was beautifully cooked, if slightly over salted for some palates, but the portion size was incredibly generous. If anything, it seemed unbalanced compared with the accompanying vegetables, as some guests commented they would have appreciated more of the delicious spring greens. 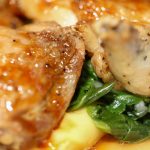 This was served with Le Grand Noir GSM 2016 (Grenache, Shiraz, Mourvèdre), with dark cherry and berry fruits leading the nose of this rich, brambly wine.  Hints of spicy chocolate and raspberry gave added depth, and juicy, sweet-spiced fruit flavours lingered through the finish.

Then it was time for the President’s Award Fund draw, which, to his obvious delight, was won by Gastronome Keith Pattison, who reported that it was his first win in 35 years of attending Reunion events!  He won Sunday lunch for two at The Ned and the draw raised just in excess of £300 for the fund. Judging by the warmth of the reaction to Keith’s own reaction, he was a very popular recipient of the prize. 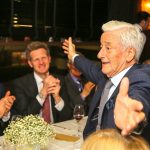 Matthew Rivett proposed the Loyal Toast. Then the current holder of the President’s Award, Raul Martinez from The Arts Club, was introduced and it was noted that he is proving to be a fine ambassador, both for the Reunion and the award.  Vice President Alison Frith toasted guests and Paul Wenham toasted country members.  And after some lively discussion about whom else should be toasted, Vic Laws proposed a toast to town members.

Dessert was pear Bakewell tart with almond milk ice cream.  The frangipane was superb and the almond notes in the ice cream a great match.  Some diners commented that the tart would have been sublime if served warm, rather than cold.

This was followed by coffee and the ‘Santé du chef et service’ proposed by Wallace Vincent, and then, what everyone agrees was a thoroughly enjoyable, relaxing and amicable evening, gave way to some of the usual informal networking and banter as it started to draw to its natural close. 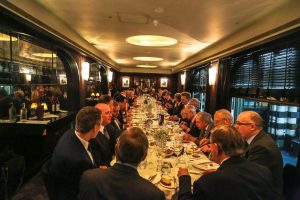