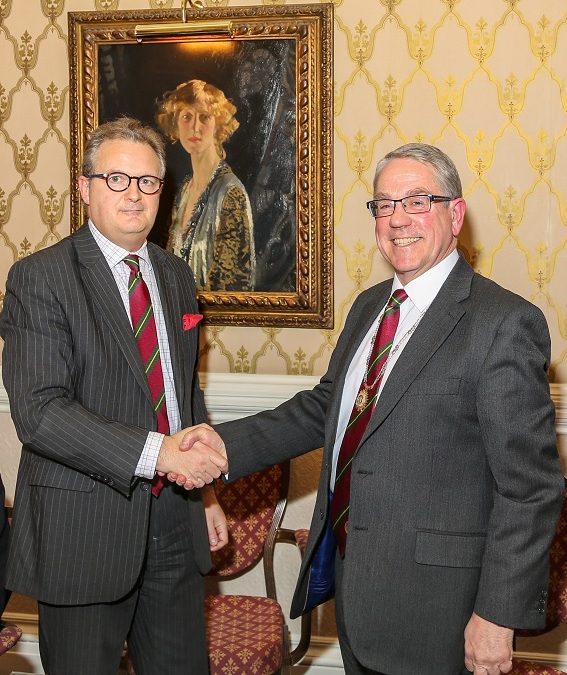 The Réunion des Gastronomes has appointed Wallace Vincent MBA, FIH, Executive Secretary of the Master Innholders, as its new President. The 50th person to hold the title of President, he takes over the reins from Serge Pradier, General Manager at the Institute of Directors.

After a 23 year military career which took him from being an apprentice chef to the rank of Major, Vincent worked with some of the world’s key service providers in defence, healthcare and education services.  A Fellow of the Institute of Hospitality and Freeman of The Worshipful Company of Cooks, he is a staunch supporter of the hospitality industry. He lives in Fleet with his wife Janice – their two grown up sons having fled the nest. Wallace is a Non-Executive Director of Guildford Cathedral Enterprise Board and, when he has any spare time, enjoys sailing, skiing, motorcycling and learning to play the piano.

At the organisation’s Annual General Meeting this week, Pradier presented Wallace with the President’s chain of office and insignia.   And the new Vice President of the Reunion – Alison Frith, managing director of boutique corporate caterer Artizian – was elected. 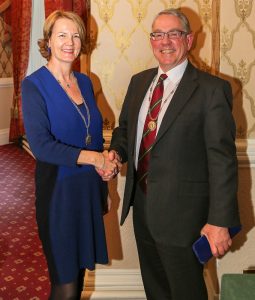 Commenting on his appointment, Wallace Vincent said: “Serge is a very hard act to follow.  He has been instrumental in a number of initiatives, including revamping our website, launching and overseeing the President’s Award and increasing our presence on social media. I look forward to working with Alison Frith and the rest of the committee to continue to build upon the success of the society.  We will be holding our 100th Annual Banquet in November, and it is a great honour to be President of the organisation at such an exciting time in its history.