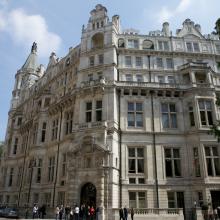 The magnificent building that houses The National Liberal Club stands resplendently on the corner of Whitehall Place, opposite the Corinthia Hotel.  It is an extraordinary building, by noted Victorian architect Alfred Waterhouse. 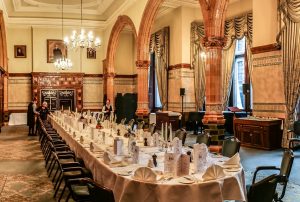 Founded in 1882 by William Ewart Gladstone, the club exists to provide facilities in the heart of London for members whose interests vary from liberal politics to the liberal arts. Today the club is completely independent of any party, but as the name implies, continues to be closely identified with the Liberal tradition, and Liberals worldwide.

After the AGM (held in the Lady Violet Room), members adjourned to the Smoking Room to network and enjoy a glass or two of Champagne Baumet, and cheese straws, anchovy stuffed olives and smoked almonds.  We then moved through to the David Lloyd George Room for dinner.

Originally designed as the club’s Grill Room, it still has two enormous original Victorian grill mountings, which give it much of its character, and is decorated throughout with Alfred Waterhouse’s distinctive tilework. In 1988, the room was renamed in honour of Liberal Prime Minister David Lloyd George, who had lodged in the club in the 1890s. Lloyd George also made extensive use of the Grill Room, including hosting a dinner there in 1905 to mark Winston Churchill’s defection to the Liberal Party.

Seated around one enormous table, we were served a superb Seafood Cocktail, 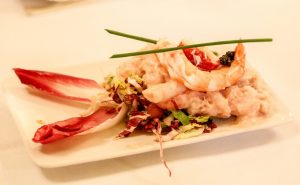 beautifully presented on a small platter.  This was well paired with a Groote Post Chenin Blanc, Darling Hills 2016 that displayed a remarkable fruitiness, with apricot and guava notes. The seafood cocktail had been given the perfect amount of seasoning and piquancy with a gentle ‘kick’. It was a great start to our meal.

The second course was Fillet of Lamb en Croûte with a Redcurrant Jus, spinach and carrots and Anna potatoes.  The jus was presented individually in tiny jugs and guests were served generous portions of the vegetables.  Unusually, the farce was flavoured with a hint of tarragon, which added an interesting dimension to this delicious dish. 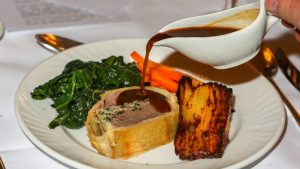 It was accompanied by a Saint Joseph Silice, Pierre et Jerome Coursodon 2014.  This was full of fruit, beautifully balanced and tannic and paired wonderfully with the lamb.

Dessert was Duo of Chocolate Mousse with Chocolate ‘Soil’.  While decadently rich, the portion size was perfect, and tiny cherries in kirsch bordered it.  A glass of Maury Domaine Pouderoux, Grand Réserve Vin Doux Natural NV, was a well-chosen accompaniment to this and the subsequent savoury course: Harlech Cheese Soufflé.  This soufflé was served in large dishes, presented for diners to help themselves (only a few London clubs are still serving soufflés this way). 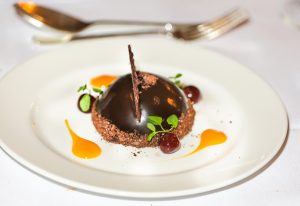 It was absolutely delicious, and judging by the number of people regretting being so polite with their first portion size and then having seconds, was another highlight of this fabulous dinner!

Wallace Vincent our newly appointed President, introduced Past President Serge Pradier who proposed the Loyal Toast and there was a rousing santé du chef et service to Head Chef Ken Milne.  Our new Vice President Alison Frith, was invited to toast the town members, Gastronome Paul Wenham toasted the country members and Gastronome Mark Emmerson toasted the retired members. New member Edward Plunket, from the City of London Club, was presented with his tie, badge and Blue Book.  The President’s raffle was drawn by Christine Yau MBE and won (very suitably, judging by the applause) by Alison.

A 10 year Old Malvasia Reserva Velha, Vinhos Barbeito Madeira or Taylor’s Late Bottled Vintage Port 2012 accompanied the coffee and home made truffles which concluded the meal and a memorable evening. 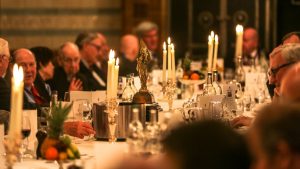