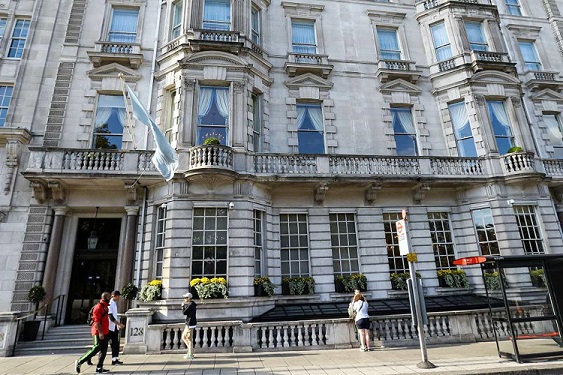 The Royal Air Force, the RAF Club and the Reunion des Gastronomes Annual Banquet each celebrate their centenaries in 2018, so it was most fitting that our first dinner of the year took place at the RAF Club. Situated at 128 Piccadilly, overlooking the long-awaited Bomber Command Memorial in Green Park, the RAF Club was given to the Royal Air Force (at the time known as the Royal Flying Corps) by Lord Cowdray in 1918. For a century now, the building has provided a central London base for RAF officers and their families.  Later this year HM the Queen will officially open 17 new member bedrooms and unveil a stained glass window commemorating the role women have played in the history of the service, as well as a new portrait of her, in the (to be) renamed Sovereign’s Room (currently the ballroom).

Guests met for a champagne reception in the Churchill Bar on the ground floor, where we enjoyed Champagne Brut NV Beaumet and delicious canapés including mackerel tartare, mini croques ‘mesdames’ and spiced lentil croustades. We then moved upstairs for supper in the elegant Ballroom with its celestial ceiling, complete with bi-plane in the corner.

Serge Pradier welcomed members and their guests for the final dinner of his three-year term as President of the Reunion.  He told guests that the very first Reunion dinner was held in 1918 at the Hotel Cecil.  The hotel was requisitioned for the war effort in 1917 and by coincidence was the location in 1918 for the very first HQ of the newly formed Royal Air Force!  The hotel was next to the Savoy in the Strand – and sadly no more; now The Shell Building.  Serge introduced and thanked fellow Gastronome Miles Pooley (RAF Club Chief Executive and Club Secretary) for hosting the event.  Miles introduced distinguished guest speaker Air Commodore Rick Peacock-Edwards, CBE, AFC, FRAeS, FCIM of the Honourable Company of Air Pilots, who is vice chairman of the Club and member for over half a century.  Air Commodore Peacock-Edwards commented that the club is still in its original premises, has 25,000 members and – with the additional ones – will have 110 bedrooms. He told guests about his own father’s time in The Battle of Britain, and how he and his father have been involved in the RAF for over half of its life.

Instead of the usual grace, Neville Watson read out a very apt and poignant poem, entitled ‘When Too Few Was More Than Enough’ written by Billy Conn in memory of the late Group Captain John Digman OBE, DFC. 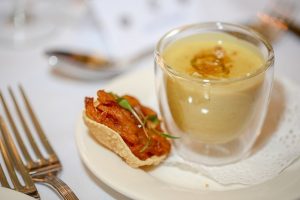 The meal began with an amuse-bouche of curried cauliflower velouté with onion bhaji.  It was a delicious indication of the quality of the meal to come!  The starter was dill and mustard cured salmon with smoked bacon and red onion jam, caper berry crème fraiche.  This was accompanied by Pouilly Fuissé 2016 “Vielles Vignes”, Domaine Cordier, which was a perfect match not only for the oiliness of the salmon, but the unusual additions to the dish.  The ‘jam’ was a curious, but inspired match with the salmon.

The main course was a triumph.  Roast Scottish venison wrapped in pancetta, wild mushrooms, foie gras and chestnut pithivier, served with parsnip purée, herb fondant potato and a redcurrant jus.  This was accompanied perfectly by Château Phélan Ségur 2005 – a magnificent Saint-Estèphe.  The venison was amazingly tender and the pithivier was a meltingly delicious addition to the plate. 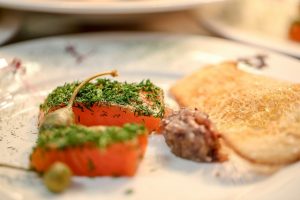 Not content with the aforementioned dishes that showcased the highly talented brigade in the kitchen, dessert was a hot pistachio and pear soufflé!  This was served with crème fraiche ice cream and cinnamon sable.  Accompanied by a Château Haute-Fonrousse 2014 Monbazillac, it was again a divine pairing. The ambitious dessert was faultlessly served and much appreciated. The subsequent ‘santé des chefs et service’ was, needless to say, very enthusiastically conducted. Paul Wenham took the opportunity of the final supper of this Presidency to thank Serge Pradier for his dedication and enthusiasm during his extended term in the role, a gesture that was reinforced heartily by the ensuing applause. 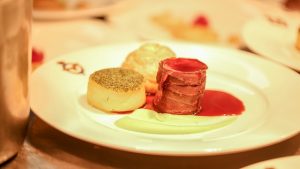 The raffle to raise funds for The Gastronomes’ Award raised the handsome sum of £470.  The prize was two personalised chefs’ jackets from Bragard, which were won by David Irving, who most generously, donated his prize back to be auctioned for the fund.  Graham Franklin paid £100 for them, making a grand total of £570.

Coffee and a remarkable selection of petit fours proved the perfect way to round off such a splendid and convivial evening.