Gout de France – from the French Ambassador to the United Kingdom 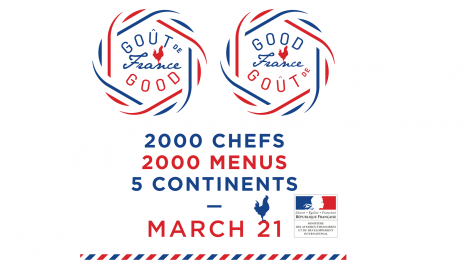 Register by the end of January!

After the success of previous years, I am pleased to announce that, for the fourth time, Goût de France/Good France will celebrate French gastronomy in various locations worldwide on 21 March 2018. Over 2,000 chefs on all five continents are expected to join the event at the start of spring. Dinners served simultaneously in participating restaurants around the world will honour the merits of French cuisine, its capacity for innovation and its values: sharing, enjoyment and respect for high-quality, environmentally-responsible cuisine. Last year’s event in the UK was a great success thanks to the participating restaurants, generating national and international media coverage and inciting foodies to book a table and take part in this unique experience.

HOW TO TAKE PART

Good France is supported by the French Ministry for Europe and Foreign Affairs, and contributes to the international Prestige of French gastronomy.

The idea is simple: by signing up you agree to create a French-inspired menu in your establishment, using local quality produce, to serve on a specific day: 21 March 2018. It will also be my pleasure to invite participating chefs to a special launch and networking event at the French Residence, Kensington ahead of the big night.

So if you’re a restaurant, brasserie or bistro, I invite you to take part by signing up before the end of January: restaurateurs.goodfrance.com/en/user/register

An international marketing strategy is in place for participating chefs in an effort to promote their dishes and expertise worldwide, with active support from French embassies, Atout France (France’s tourism agency) and media partners, France Médias Monde, TV5 Monde and JCDecaux.

In the United Kingdom, participants will benefit from promotion of their restaurant:

– in print, broadcast and online via national and local media.

The price of the menu is at restaurants’ discretion and each participant is encouraged to donate 5% of sales to a local NGO working in the health and environmental sectors.

I sincerely hope you will join us in ensuring the success of this great initiative.

French Ambassador to the United Kingdom