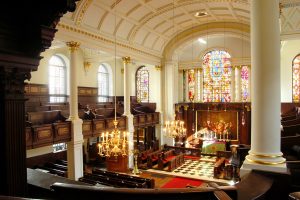 Despite a forecast of it being cloudy but dry, it was exceedingly wet outside when everyone arrived at St George’s Hanover Square for the annual church service on the first Sunday of Advent.  But once inside, there was much warmth, from the rector – fellow Gastronome Father Roderick Leece – and the regular congregation, Our President, Serge Pradier, delivered a reading and the choir’s lovely performance of Hayden’s Missa Brevis for the sung Eucharist was only surpassed by the anthem And the Glory of the Lord by Handel, which was superb.  The fact that Handel himself had worshipped regularly in this very church made this anthem particularly memorable. (Handel came to live in Brook Street in 1724, just as the church was nearing completion, and almost at once became involved in the affairs of the new parish.) 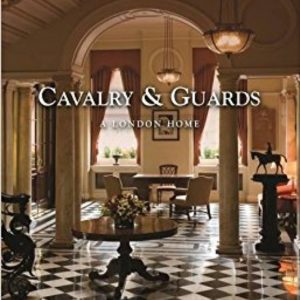 After the service, the gastronome contingent of the congregation adjourned to the Cavalry and Guard Club on Piccadilly for lunch, hosted by Past President David Cowdery.

Guests admired the magnificent Christmas tree at the foot of the decorated staircase before moving through to gather and mingle over a glass or two of club champagne, Lanson NV. 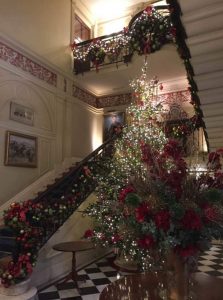 Then it was upstairs to the beautiful room on the first floor, overlooking Green Park, which straddles not one, but three buildings originally built on Piccadilly (numbers 125, 126 and 127).  David Cowdery, who has been at the Cavalry & Guard Club for 13 years, welcomed the guests and gave a brief history.  The Guards Club was founded in 1810 prior to Waterloo (with the aim of keeping officers from gambling and ‘carousing’ the streets around Mayfair!).  The Cavalry Club was founded in 1890 on the current site, and in 1976 the two clubs merged.  Today the combined club has some 2,900 members, a third of whom are serving, and includes many members of our Royal family who are associated with cavalry or guards regiments.

The starter of Crab & Prawn Cannelloni with Watermelon & Spiced Red Pepper Dressing was refreshing and unusual. 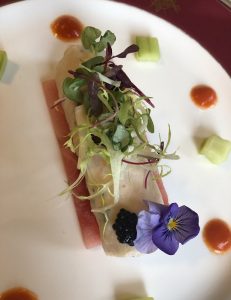 The ‘cannelloni’ element of the dish was a base of finely sliced watermelon, which offset the other components perfectly.  It was accompanied by Alvarinho “Terrior Edition” Quinta da Calçada, Amarante Sub-Region 2015.  This delicious Portuguese wine also matched well the piquancy of the Demitasse of Roast Pumpkin, Caramelized Honey & Cumin Soup that followed.

On to the star of the show in food terms: a magnificent slice of Beef Wellington 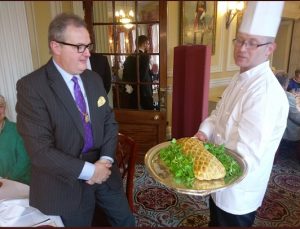 with a Chestnut Farce and Madeira Sauce.  Accompanied by fondant potato, braised carrot and Brussels sprouts. The fillet of beef was amazingly tender and cooked faultlessly – and perfectly pink.  A Château Grandis, Haut-Médoc 2006 was a fine accompaniment to this superb main course.

The dessert of Chocolate & Fig Mousse with a Rum & Raisin Syrup was served with Muscat Beaumes-de-Venise, Domaine Des Bernardin 2015.   A very pretty dish, it has a ‘crown’ of tiny meringues, and was accessorised with fresh, edible flowers and a few fresh raspberries and blueberries to offset the richness. 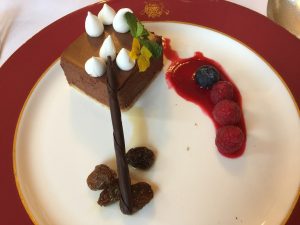 Serge thanked members of the committee for their help, and in particular David and the team, who joined guests for the ‘santé des chefs’.  And then it was time for the traditional festive ‘sing along’ session over the coffee, mince pies and port. 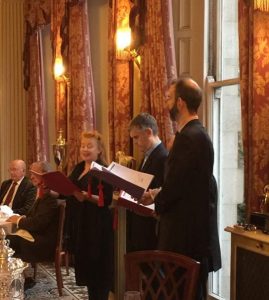 It was prefaced by David instructing the guests at different tables as to the particular actions they were required to make for each verse of The Twelve Days of Christmas. This kick-started the session…and was truly a sight to behold! 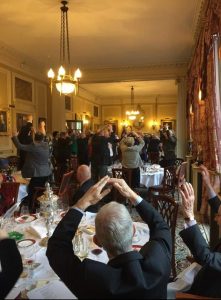 Some of the members of the church choir then joined the guests for a few more carols, ending with ‘We wish you a Merry Christmas’ and then it was time for the guests to head home.

A thoroughly enjoyable, and very festive event to end our gastronomic year! 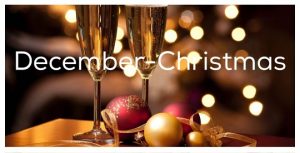