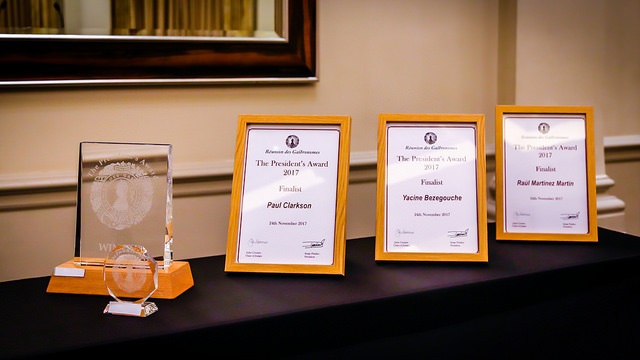 It was ‘bravo’ all round on Friday evening (24 November) when 35-year-old Raúl Martínez was named winner of the inaugural Réunion des Gastronomes Award. The restaurant manager of The Arts Club was presented with his trophy by Stephen Martin, director general of the Institute of Directors, guest speaker at the organisation’s 99th Annual Banquet, a glittering event at the Langham Hotel, attended by senior figures and guests from the hospitality industry.

Martínez impressed the judging panel from the outset with his comprehensive research into the history and aims of the Réunion. Also, during the in-depth interview processes, he provided structured feedback on how he would like to promote the aims of the Réunion to industry colleagues and help build awareness. “In addition he was proactive in arranging show-around visits with the other finalists – giving us confidence that he’ll maximise the vast networking opportunities offered to our winner.” Comments John Cousins, chair of the judging panel. “The other two finalists – and indeed the shortlisted candidates – were also very worthy contenders, but after careful consideration, Raúl proved to be the clear winner.”

Raúl Martínez started his career working in his father’s bar in Spain, studied food and beverage management, then gained a Tourism degree in Madrid with experience at the 3-star Zalacain. In the UK, he worked in restaurant service, moving on to becoming restaurant manager at Ibérica Food and Culture, London, before joining the Arts Club in 2012, and becoming became assistant restaurant manager soon after.

Martínez has won four two-day placements (stages) with expenses covered, across a raft of industry sectors. He will meet with the judging panel in early December to choose those best suited to his career development. He also receives invitations to attend five further Gastronome events in the next year, as well as benefitting from mentoring and networking opportunities throughout from the membership. He also now becomes an Associate Member of the Réunion des Gastronomes for four years. “We believe the total prize value for Raúl to be in excess of £3,000 and are delighted to see the inaugural award being awarded to such a worthy and aspiring winner, who’s a great credit to our profession.” Says Serge Pradier, President of the Réunion.

Pradier also thanked the judging panel for their enthusiasm and the time they have invested in the process. The panel comprised: John Cousins, director of The Food and Beverage Training Company; Alison Frith, managing director of Artizian Catering Services; hospitality consultant Theresa Maw and Wallace Vincent, executive secretary of The Master Innholders and vice president of the Réunion.

All three of the finalists were invited to the banquet (the other two being Yacine Bezegouche, assistant F&B manager at The Hotel Café Royal and Paul Clarkson, head chef trainer at The Clink, Brixton). From the outset of the competition, the calibre of entrants was very encouraging; so much so that each of the original shortlisted candidates have been offered individual mentoring by the judges, which is now well underway.

Entries for the 2018 award will be open soon.

For further information, additional images from the event (in high resolution), interviews with Raúl Martínez and/or the judges, please contact Alison Jee on 020 8744 0744 alison@alisonjee.co.uk