The Evolution of Gastronomy 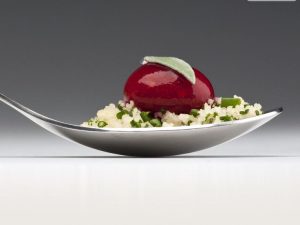 IT IS always a dangerous exercise to put down a point of view on the newest stages in the evolution of gastronomy. Nonetheless, let us try. As ever, it will be useful to take a small step backward in order to gain some perspective on the subject. Nouvelle cuisine was born in the 1970s primarily by the young chefs formed by Fernand Point at his Restaurant de la Pyramide in the Rhone Valley. Technology was an important factor in the development of this cuisine. The United States at the time already had blenders capable of making magnificent iced concoctions. Then food processors (mixeurs) arrived under the Robot Coupe brand. Suddenly, we discovered a new perspective on mousses, mousselines, and textures in general. Making them in the traditional manner was tough to do, a test of one’s style. But the new machines available to chefs were about to change all of that. No more did we need those monstrous marble, granite, or wooden mortars. No more did we make quenelles as we had done for so long; it was time for something new. The doors of gastronomy opened upon new horizons.