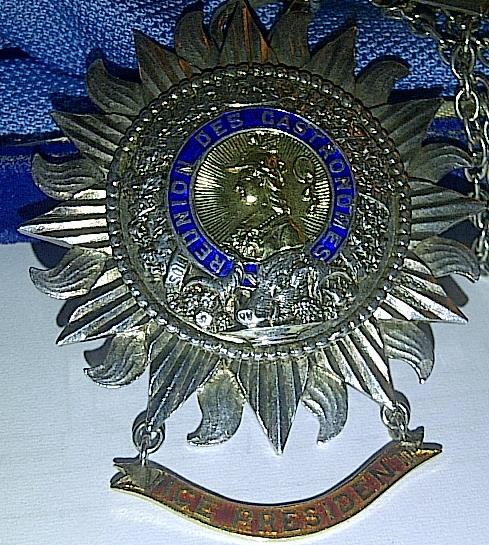 The design remains somewhat of a mystery and it has proved difficult to fully research.

From the minutes of the 11th March 1904 the subject of the crest for the Réunion was fully discussed.

Unfortunately no mention is made of the cost or who would manufacture the jewel. The design was agreed but there is no description of the emblem.

From the Minutes of a Committee Meeting of 11th March 1904

Mr A Judah in the Chair with 6 others

“ The subject of a crest for the Réunion was fully discussed and it was proposed by Mr Kerpen and seconded by Mr Vandyke that the design presented by Mr Pilet be adopted and it was agreed that it should be reduced to the size of a two shilling piece. It was further agreed that the decorations should be made in gold and enamel for the President, silver gold and enamel for the Vice President and Honorary Secretary and Treasurer, and silver and enamel for the Members; these emblems to be worn by the Members whenever there is a meeting. The Presidents, Vice Presidents and Honorary Secretary’s jewels are to be the property of the Réunion. The ordinary jewels each Member will be charged for at the cost price and in the event of a Member resigning the money he has paid for the jewel will be returned to him upon his handing the jewel to the Secretary – carried unanimously. “

An extract from the AGM Minutes of 9th January 1905

“ New Members upon joining will be provided with a badge at a cost of £15/= and all badges must be worn at every meeting of the Reunion. “

An innovation was the new pattern of the Badge of Office for Past Presidents, which was more distinctive than the badge being worn on the lapel; the existing badge to be remoulded and worn round the neck.

Past President and Members’ badges would not be ready until October.

Discussions took place with regard to a suitable badge to be worn by the first President:

It was unanimously agreed that in view of Mr Judah’s occupation of the Presidency since its inception he should be invited to retain the gold badge worn by him as President and that a suitable inscription be added thereto.

It was further agreed that designs should be obtained for a new Presidential badge.

The President’s badge to be suitably set and bear an inscription on the back as follows:

It was also agreed that the Vice President’s badge should be suitably set and suspended from a silver chain at a cost of £4.16.0.

At a Committee Meeting held at 8.00pm on Friday 31st March at the Hotel Cecil, Major Mercer, President, presented the badge of Past President to Mr Judah and the Vice President – J R Cleave.

Presidents Ladies or Consorts jewel – When Gerald Harris was Secretary he commissioned Collingwood’s of Conduit Street to make a jewel and presented his late wife with it as an appreciation of her help when she was his Secretary. Since then it was been worn by the President’s wife during his Term of Office.

From the Balance Sheet of the 31st December 1922

26.1.1931 New Badges were ordered at a competitive price but no manufacturer is mentioned.

But no manufacturer’s name

Messrs Toye, Kenning and Spencer have found in their records they have been supplying the badges since 1972 and are manufactured in Sterling H.M silver and enamelled but we cannot find any trace of design patterns.

From the Minutes of 7.2.1972 Mappin and Webb’s quotation was found to be too high to accept.

From the Minutes of 5.6.1972 Badges had been received from Alexander Clark and Company Ltd.

From the Minutes of 4.7.1974 Alexander Clark was asked to quote for a fine chain for Past Presidents but the quotation of £5.05 was considered too expensive and it was suggested to replace them by a blue ribbon.

At a special dinner on Monday, 9th January, 2017 held at Innholders’ Hall, three Past Presidents – Mr Chris Briere-Edney, Mr Alan Fairbrass and Mr George Goring OBE were presented with specially commissioned gold plated Past Presidents’ badges on a blue ribbon, to mark their fifty years of service to the Réunion des Gastronomes. 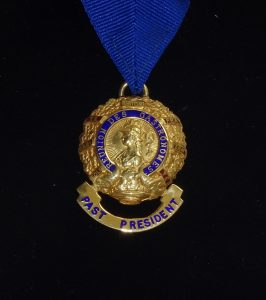 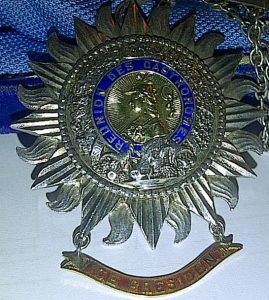 Horseshoe with wording  “Reunion des Gastronomes” on a blue background

“The Goddess” It is Minerva Jupiter’s, Daughter.  She is the Goddess of Wisdom and Arts.

“The Dragon” on the helmet is a generally one of her ornaments, which means that Wisdom, like the dragons’ is always awake.

Seven scrolls on red enamel background  From the bottom are:

At the foot is a “Boars Head” between two cornucopias

So it takes the Chef plenty of Wisdom to be perfect in his Art.

The possible explanation above, suggested by Mr G Bournton (a member from 1917) of the St James’s Restaurant, St. James’s Street, Derby, is in a letter dated 30th October 1924 addressed to the President 1929 – 1931 Mr Stanley