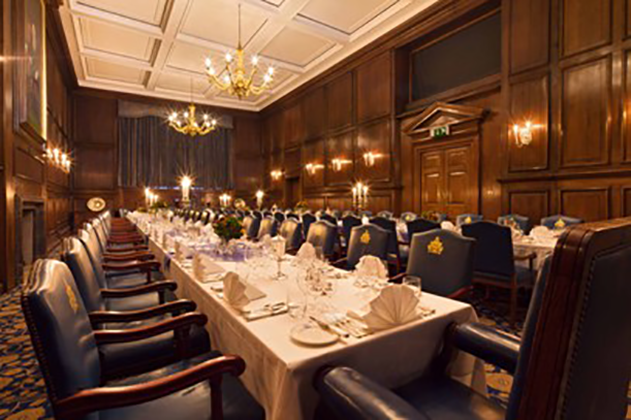 Background to the event

Fifty years ago in 1967, nine new members were elected to the Réunion des Gastronomes. Of these, three are still members Alan Fairbrass, George Goring, OBE, and Chris Briere-Edney. The supper was held to recognise a century and a half of membership, commitment and support of the Réunion.

Apart from Michael Day who joined in 1961 and was made a Life Member to mark his 50th anniversary, from the archives there has only been one other person to have served fifty years and that was W G (Billie) Cox who was President for five years 1923 to 1928.  It was he who ran Frascati’s Restaurant in Holborn which was the second home of the Réunion from 1923 until it closed in 1955 and where, apart from the Annual Banquet, the monthly suppers were regularly held. Billie Cox, who died in 1968 and became a member in 1918 at Frascati’s, was also honoured by a dinner given by the Réunion to mark his retirement in 1955.

Menu and Wines
The menu has been specially prepared by Fellow Gastronome Herbert Berger to reflect dishes of the sixties.
Champagne Reception
A selection of canapes was served, including Devils on Horseback, Smoked Salmon on Brown Bread, Quiche Lorraine, Chipolatas in Worcestershire Sauce, and Liver Pate on Toast.

First Course
Fish Course
Main course
Dessert
Great appreciation was shows by those attending to:
Fellow Gastronome Herbert Berger and his team and Paul Slylianou and his service team in the room.
Grateful thanks for their help and support in creating the evening were also given to:
Enotria & Coe for the Champagne Charles Vercy Brut NV and the Trimbach Pinot Blanc; Hayward Bros. (Wines) Ltd for the Jaffelin Pinot Noir, and Mark Grove, the Cook & the Butler for the Barão de Vilar Vintage Port.
Pictures and word by Gastronome John Cousins