Supper at the IET Savoy Place 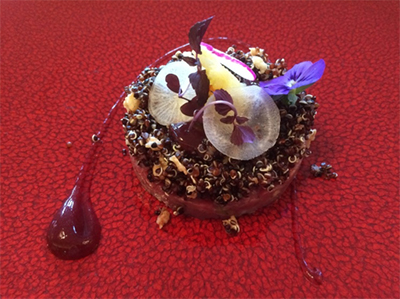 The Gastronomes mid-summer Sorèe of the year had us venture to the IET a large red brick building on the north bank of the River Thames; after its reopening in November 2015. The venue’s first major structural reconfiguration of facilities and services in 30 years sees a complete overhaul of this much loved location. What hasn’t changed though is its renowned first-class customer service, Savoy Place was built between 1886-1889 as a joint Examination Hall for the Royal College of Surgeons and the Royal College of Physicians designed by architects Stephen Salter and H Percy Adams. It was later extended to include classrooms, laboratories and a lecture theatre. Important medical research was carried out in the laboratories but by 1902 the rooms were leased out and in 1909 the Institution of Electrical Engineers bought the remainder of the lease from the Duchy of Lancaster. Much work was carried out in 1909 in preparation for the move into the building in 1910. In the 1959 there was further renovation that included alterations to the Lecture Theatre and conversion of the front wing of the third floor into a refectory and kitchen by architects Holden, Adams and Pearson. The newly furbished Library offers an insight of the days gone by when the students came to study, now a wide open dining space with views of the south bank and the London Eye.

The menu prepared by Harbour & Jones is led by Patrick Harbour and Gastronome Nathan Jones who between them have almost fifty years combined experience at the highest levels of the food industry, and been offering innovative menus and exceptional service at the IET since the re-launch in October last year. Our sample of this is replicated below accompanied with pictures for your enjoyment. It seems unfair to try and explain the foods, as the listing and pictures must invoke a dream of the readers’, to compliment the imagination of the creator and his team.

The president welcomed us to The IET. The menu for the supper was superbly matched throughout the evening with quality South African, and Californian Wines following a reception with a cool glass or two of Vina Casablanca Blanc de Blanc in the midsummer sun on the chairman’s private balcony we were invited to take our places for a meal of wonderful modernity. A simple dish of crab from my home town, bringing back memories of the south Devon coast and the aromas of the sea. The wine paired with this course was Groote post Kapokberg Chardonay, Darling hills, South Africa 2013. This Appealing golden straw colour wine with a nose of toast and butter with upfront citrus flavours on the mid-palate set it off well against the Crab. What an opening dish! The slight nuttiness of the black Quinoa, the tart of the Shiso and the light smoke of the Beef, supper! The crusher, was most certainly not the dish but the wine served with it; a light Pinot Noir from Clarksburg, California 2013. This earthy yet spicy Pinot Noir is powerfully aromatic, with notes of pomegranate, rose petal and nutmeg, with a nice toasty knish, matched well with the Quinoa. This wine was also served and equally well matched with the lamb, of the salt marsh. The aroma that came with this dish was subtle, but also noticeable, a little bit like the service staff, the food arrives but you are not sure when it came discretion is the key to great service; but I digress, the nose of anise that erupted from the baby fennel is proof that only the best ingredients are used and by the chefs that know how to use them; again this brought back the memory for me as I am sure with other gastronomes of the south coast the salt marshes of Romney, close to my home now, the Lamb full of flavour carried from the marsh and slow cooked in such a way that it was divine in its tenderness. The final dessert dish was again enjoyable, the repetition of aniseed in the fennel pollen was a slight oversight however this was more than made up for by the lightness of the pistachio sponge and sharpness of the citrus; though this dish worked well, it would have been nice to see the choice of wine which could have married the sharpness of the lemon whilst bringing out the almond taste of the apricot.

Before coffee was served the normal toasts took place to honour the town members; the city members, the retired members; the guests, and our host, this was completed in the normal comedic eccentric manner; this was followed by the presidents draw of ten and twenty pound notes; for the prize on offer was a three course dinner for two including wine in the Terrace Restaurant, managed by fellow Gastronome and committee member Daniel Ayton, this was won by Kate Gould.

The rich roasted coffee then followed with a good selection of petit fours, santé to the chefs and service, and a tour to the roof terrace, all in all another great evening, and rich in food, company, conversation and surroundings.

Words and pictures by Daniel Ayton

The Supper was competed with Coffee and Chocolates