Summer Dinner at The Travellers Club 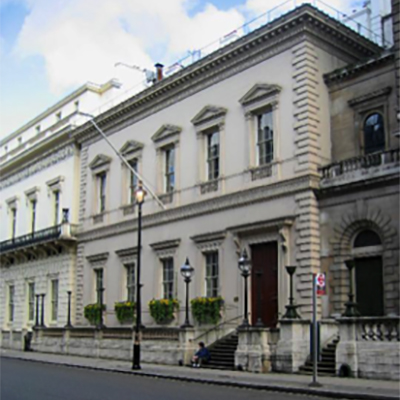 Our summer gathering was at The Travelers Club in Pall Mall where on arrival we were escorted to a Ayala Champagne Reception and Canapés whilst fellow Gastronomes gathered and greeted each other in conversation. Dinner was called promptly and we were lead to the historic library where we took our place. The President welcomed all and introduced our host for the evening fellow Gastronome and Travellers Club Secretary David Broadhead. David proceeded to enlighten the gathering of the history of the Club outlining its architecture and highlighting some specific features. Of course details were sent out to Members on the Calling Notice and can be referred to.

The grandeur of the Library was quite heavy on the eye and everywhere one looked new sparkles of knowledge could be inspired from the copious volumes available. Tables laid with crisp linen, folded napkins and shining cutlery pre-empted the arrival of our first wine. Le Soula 2009, Domaine Le Soula, Vin de Pays des Cotes Catalanes. Light and golden, elegant herbal and fennel notes. quite rounded with soft oaky notes too. It was youthful and pleasant on the palate. This accompanied our first course of a Chicken and Quail Ballotine with a Muscat Grape Velouté

We then moved onto Bila-Haut 2014, Occultum Lapidem, Michel Chapoutier, Cotes du Roussillon Villages. A great dark garnet red with at first quite a closed nose with dominant of graphitic, leather and then intense aromas of pepper and black fruits. The end was delicate and fresh. This complimented our main course of Roast Loin of venison and blueberry Jus, Thyme fondant potatoes and a Cauliflower Purée. Perhaps the joy and star of the evening was Chateau Petit Vedrines 2001, Sauternes. A lovely golden colour. A nose of pleasant spices, citrus, caramel, vanilla and peach with a light body. This drank beautifully with our dessert of Pineapple and Rhubarb Mille Feuille and Strawberry Compote and was followed by Coffee & Mints. The Presidents Fund was boosted by a contribution to the customary banknote raffle and raised £220.00 the winner of the prize kindly donated by Michael Gray from the Hyatt Hotel was Robbie Kurz.

Chef was called and ‘Santé du Chef et Service’ was proclaimed and glasses raised. Thanks were extended to David for an excellent evening after we had raised the roof with a rousing rendition of Happy Birthday to him.

Gastronomes then meandered into the evening air to make their way home into the night’s darkness.