Supper at The Caledonian Club 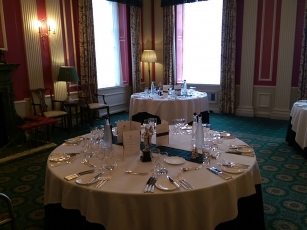 Reunion was certainly the taste for this Inaugural Dinner for new President Serge Pradier. Past work colleague of some 11 years ago, our host Ian Campbell, Secretary at The Caledonian Club and fellow Gastronome who also introduced Serge to the Reunion des Gastronomes in 2004.

Members and guests were greeted on arrival to The Caledonian by a lone Piper at the entrance, who later piped us into dinner as well as escorting the Haggis & Neeps taster with a Nip of Bowmore, Islay Single Malt at the beginning of Dinner. This was apt as we were dining in The Morrison Room named after Hugh Morrison(UK politician) who had had the house built in 1907 as his London residence and owned most of the Isle of Islay.

Pre dinner drinks of Champagne Ayala were taken in the Library before being summoned for dinner.

Following the customary introductions and welcomes dinner commenced with our Haggis taster. This was to compliment: Scallop and Tempura Langoustine with Pea Risotto – Pan-fried Scallop with a lightly tempura battered Langoustine tail, both gently cooked with care, remaining succulent and sweet complimented by a soft and slightly nutty pale green risotto and garnished with pea shoots.

Our next wine: Spatburgunder 2011, Reichsrat Von Bhul, Pfalz, Germany.
The Reichsrat Von Buhl estate has been a family-owned business for over 150 years and has ranked amongst the most prestigious estates in Germany. An elegant ruby colour, the palate is awash with blueberry and cherry fruit, this lively and ripe fruit is framed perfectly by soft, supporting tannins. The finish is long and elegant with further spices from oak ageing adding another layer of flavour. Our Main course: Fillet of Pork wrapped in Pancetta with “Pomme Pomme” Galette. Sliced medallions of Pork served on a delicate thinly sliced galette – a combination of slightly acidic apple and potato. Garnished with seasonal vegetables and jus. Pudding: Caramel and Whisky Parfait with Cracked Praline Crisp. A tranche of parfait with a genoise base, dribbled with caramel and crowned with a crescent of Praline with cream foam on the side.

Coffee was served accompanied with Crystalised Fudge and Port poured with conversation and camaraderie.

The President’s Fund Draw – for Westminster Kingsway College and West London University to assist any hospitality students as they felt appropriate during the course of their studies – benefited from a generous donation of £310.00. The prize of a Voucher, Luncheon for 2 at Angela Hartnett, Lime Wood Hotel, New Forest and was won by Gastronome Wally Vincent. Congratulations were also extended to Christine Yau on her recent award of an OBE. Founder in 1986 of Yming’s restaurant in Soho, London, her honour was awarded for services to the hospitality industry. A leading figure in the Chinese community and helped launch the Chinese Chefs School at Westminster Kingsway College in 2002. Christine has also successfully served the allowed three, three year terms of office on the committee of the Reunion des Gastronomes and made a valuable contribution to the Reunion during that time.

Our evening finished with a rousing “Santé du Chef et Service” proposed by The President to Chef, Michael Garcia.

“Post overheard gossiping included” many compliments for an excellent evening of good food, wine and camaraderie.