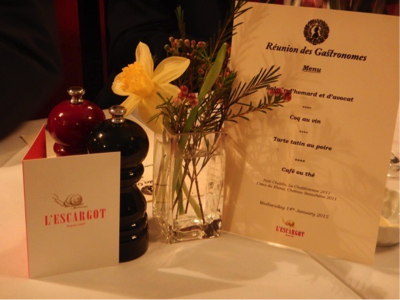 In a departure from the monthly suppers, members of the Réunion, and their guests, were warmly welcomed to the iconic L’Escargot, considered to be the oldest French restaurant in London. Fellow Gastronome, and part owner of L’Escargot, Brian Clivaz, was the host for a very memorable luncheon in this wonderfully traditional (but not old fashioned) French restaurant. Established in 1927, and set in the heart of Soho, L’Escargot has regularly been voted one of the best restaurants in London and is famous for its bourgeois French cooking, with today’s luncheon providing a great example.

The Laurent Perrier Champagne reception was held in one of the first floor private dining rooms, with its décor reflecting that of the restaurant below. Canapés were served, including one of escargot (of course!) which pleasantly perfumed the air with the aroma of hot butter and garlic.

Generous portions of succulent cold lobster served with slices of avocado and set on a dressed salad. Complementing the food was the Petit Chablis, La Chablisienne, 2011, a dry, mineral expression of Chardonnay. A main staple of the restaurant, this classic dish was served brasserie style with smooth creamed potato, a very tasty sauce, and with the chicken literally falling off the bone as soon as it was touched. There were all empty plates on our table at the end. The wine was Côtes du Rhône, Château Beauchène, 2012, a Southern Rhône blend (mainly consisting of Grenache, Syrah and Mourvèdre) providing a good balance between alcohol and tannins, notes of ripe red fruits, and finished with a touch of spiciness. Glorious classic tart served with indulgent, help yourself, thick fresh cream. The pear melted in your mouth and the whole dish benefited from having a pleasantly restrained sweetness.