History of The Gastronome 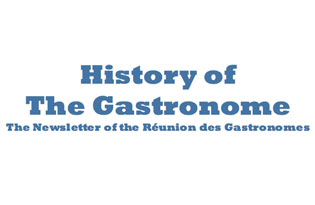 On the 21st January 1905 a discussion took place at the committee meeting regarding the Réunion des Gastronomes having an organ to represent them and it was decided that a paper called “Food and Cookery Catering World” should be adopted for publication of all proceedings of the Réunion and the motion was carried unanimously.

However, no further mention of the paper’s existence has been noted in any other minute and no copy has been traced.

In November 1989 the Newsletter of the Réunion des Gastronomes “The Gastronome” was first published by the founding editor – John Cutress MC. It has since had three further editors, short profiles are listed:

The Gastronome was published twice a year to keep the membership who had difficulty in attending monthly suppers in touch with the affairs of the Réunion.

It reported on menus, published letters and jottings and gave up to date news of members.

John joined The Gastronomes in 1969, quickly became a Committee member and was the creator of the newsletter.

He was an exceptional man, an outstanding and much loved citizen of Brighton. Born locally atop his father’s Bakery (Forfars); bakery became his first love. He graduated at Lausanne College and started a major outside catering company. He founded Eatons- A successful local Restaurant and took over The Courtland Hotel in Hove. He was the head of the family business, a director of the Brighton Football Club, Chairman of the South Eastern Division of the British Hotels Restaurant Caterers Association and was at one time head of the Sussex Branch of the Chaine des Rottisseurs.

He served during the Second World War as a Captain with the 111th Field Regiment Royal Artillery. He was awarded the Military Cross and the citation described the action of Captain Cutress’s involvement in the battle for Surmartin on the Island of Brac in Albania on 4th April 1944.For his part in the action which to led to the capture of the German occupied port of Sarande the citation continues “due entirely to Captain Cutress’s coolness and initiative he single-handedly re-captured an OP vital to the whole operation and drove off some forty Germans”

During his editorship, I particularly enjoyed John’s choice of comic and curious verse and his selected cartoons with a relevance to our profession.

From Table Talk Thursday 20th January 1994, Our apologies to John Cutress, of the Reunion des Gastronomes, for attributing an extract from his newsletter to the Association Culinaire Française. We promise to be more careful – if Mr Cutress promises not to refer to us as the Hotel and Caterer in his publication “

He had a great zest for life and was much loved for his warmth, kindness and humour. He was a man of many interests and always enthusiastic in anything he undertook.

Stephen Korany was the son of a very well known Hungarian restaurateur. After training at the hotel school in Nice, Stephen took up the position of Assistant Manager at the Selsdon Park Hotel, his next appointment was Manager of the Pigalle Restaurant in Piccadilly.

In 1953, at the age of 28, Stephen became the youngest General Manager in London when he was appointed to the Basil Street Hotel. In 1962 he also became General Manager of the Belfry Club (now Mosimann’s) having helped “the Basil” buy this famous club from the estate of Vecchi, another well known Hungarian restaurateur based in London and President of the Reunion from 1953 to 1954.

After Mr Winslow-Taylor owner of “the Basil” died in 1969 Stephen became Managing Director of both establishments and remained at “the Basil” until 1995 when he decided to retire.

Although he did not arrive in this country until after the last war, his command of the English language was incredible, as fellow Hungarian, Egon Ronay, so often commented.

Stephen‘s daily production of internal memos was prodigious. Many were totally unnecessary when just the spoken word would have sufficed, even when dining in the Basil’s restaurant he would have his pen and note pad on the table taking frequent notes which later would be turned into memos but he really enjoyed the written word.

When the Réunion so sadly lost its first newsletter editor Stephen, who had recently retired, was the ideal member to take over the editorship and this he did with great aplomb.

Stephen had an enormous knowledge of the hotel and catering industry and took great pains to edit very carefully all the news items that he was sent, into which he often injected some of his droll humour.

Neville joined The Reunion in 1981 and served on the Committee for a decade or so and has been a contributor to the newsletter over a long period.

A graduate from Lausanne’s Hotel School. He worked at Montagu Beach- Nassau- was at Gleneagles Hotel for five seasons before managing The Royal Garden and Athenaeum Hotels in London. In 1972 he became Director in charge of Ring and Brymer and The Banqueting & Restaurant Divisions of Trust House Forte Catering.

1978 saw him taking charge of The Norfolk Hotel in Nairobi. Then for ten years he was the Managing Director of Earls Court and Olympia Exhibition Centres for Beet Rumford.
With his Wife, Jo, they bought in 1991 the Falcon Hotel, Castle Ashby in Northamptonshire, where they won many awards. He is a Liveryman of the Worshipful Company of Fletchers and is the busy Clerk to the Worshipful Company of Scientific Instrument Makers.

Neville is currently the Secretary to the Réunion having taken over from the long serving Michael Thatcher in 2011.

He served a traditional kitchen apprenticeship under Maurice Ithurbure, one of Escoffier’s last pupils, before undertaking the Savoy Hotels Management scheme. There, under Maître Chef Silvano Trompetto he was appointed first commis saucier and first commis poissonier of the Savoy Grill.

Then followed a one year stage at the Plaza Athénée Paris.

He is a graduate of the University of Strathclyde with a BA in Hotel Management.

He is currently Proprietor of the Black Boys Inn- Hurley which he acquired in 2004.