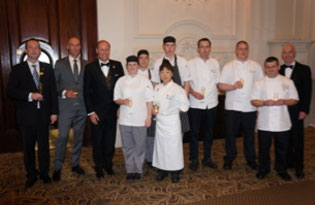 Almost 100 members and their guests gathered at the famous Langham Hotel, London in Portland Place for the 95th Annual Banquet, hosted by fellow Gastronome and Langham Group Managing Director Duncan Palmer. A pre-dinner reception provided diners with generous quantities of a superb Laurent-Perrier Champagne Brut NV combined with an assortment of delicious canapés. The reception was made especially memorable due to the beautiful, moving and at times haunting harp music provided by the young, highly talented musician Joseph Treloar. For those who are less familiar with The Langham, London, it is a most elegant Victorian 5 star hotel that has enchanted royalty, dignitaries’ and celebrities since 1865 when it opened as Europe’s first Grand Hotel. Rightly described as a “veritable icon among luxury hotels”, The Langham, London enjoys luxurious guestrooms and suites, 15 function rooms, Chuan Spa, fine dining restaurant, Roux at The Landau and Palm Court, famed as the place where the tradition of afternoon tea was born. During a short opening address by Philippe
Rossiter, President of the Réunion
des Gastronomes, was pleased to welcome Stephen Smith, a Professional Chef
Diploma graduate of Westminster Kingsway College, who had recently been awarded
the society’s Wolsten-Croft Trophy. Duncan Palmer was then invited to say a few
words before dinner. After welcoming guests to the magnificent Langham Hotel, London, Duncan reflected upon the “elegant society gatherings held 100 years before” in the magnificent Ballroom where the Gastronomes were about to dine. Following grace which was given by the Réunion Padre Roddy Lees, starter was served. This was a delightful citrus marinated Scottish salmon with Nashi pear and lime crème fraîche accompanied by a “deliciously soft and full of elderflowers” Sauvignon Blanc Isabel Estate, Marlborough, New Zealand 2012. The main consisted of a beautifully presented Rose County beef fillet with oxtail crust, Heritage carrots, potato pie and Bordelaise sauce accompanied by a velvety Rioja Crianza Vina, Amezola, Spain 2006 which one guest described as having “an intoxicating aroma of wild berries and vanilla”. Following the main course a selection of very fine cheeses from the Franche Comté was served with crispy hand crafted biscuits resulting in a combination of smoothness, crisp and intense on the palette. As a slight twist, diners then enjoyed one of two mouth-watering alternate desserts. Either a warm 70% Guanaja chocolate fondant with gourmet Madagascan vanilla ice cream or Pear Belle Hélène, both served with a stunning glass of MR Moscatel Telmo Rodriguez, Malaga, Spain 2009 which wasn’t at all intimidated by the depth of the chocolate sauce. Before enjoying coffee and petit fours, guests were entertained in a most unusual fashion by a Royal College of Music graduate, Philip Achille, who played two classical and two jazz pieces on the harmonica! An original, somewhat unique and spellbinding alternative to an after dinner speaker. Having designed an excellent menu, Executive Chef Graham Chatham and his kitchen team was later introduced to the guests, along with the attentive and professional front of house team.